Short answer: cachaça is like rum, but from Brazil.

Long answer: you knew I would give you the long answer, didn't you? 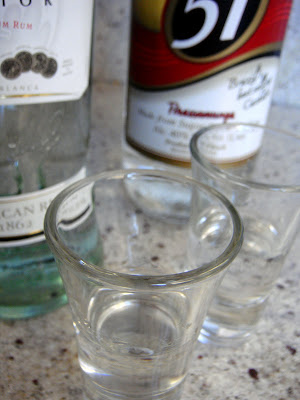 First things first: how in the world does one say "cachaça"? For a long time (I am now embarrassed to think about this) I pronounced this word as "kuh-CHAH-kuh", and nobody corrected me because apparently no one else I know knows how to pronounce it, either. Finally, for this blog post, I consulted that greatest of all authorities, the internet. I've always said that Portuguese is like Spanish, but smooshier, and the word "cachaça" is no exception. Turns out the little thing that looks like a 5 under the last c (it's called a "cedille") alerts you that the c is a soft sound, so the word is actually pronounced "ka-SHAH-suh". Which will make you sound very sexy. Or, just like you have a lisp. Try this out early in the morning, when your sleepy voice is operating at a nice alto. (Or bass, or whatever. Does this happen to anyone else? I swear my voice is like an octave lower for about an hour after I wake up.) Ka-SHAH-suh. Ka-SHAH-suh. Kashahsuh. Kashahsuhhhh.

Kashahsuhhh is the third most consumed spirit in the world, because there are a lot of people in Brazil, and they like to drink. (The first and second are vodka - because there are a lot of people in Russia, and they really like to drink - and soju/shochu, an Asian spirit distilled from rice. (Which I have never, ever heard of, which probably means it will be the Next Big Thing on the cocktail scene.)) Cachaça differs from rum in that it's distilled from fresh sugarcane, whereas most rum is distilled from molasses. Molasses is a by-product of sugar production - it's what's left after the refineries boil the cane juice as much as possible to extract all the sugar crystals, because sugar producers are greedy bastards. 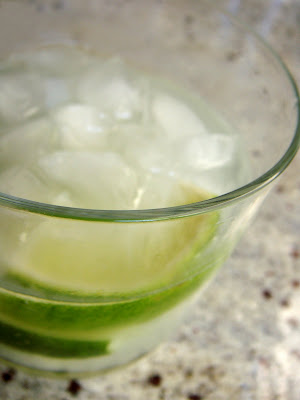 A great deal of cachaça is consumed in the form of caipirinhas. The caipirinha (kai-pur-EEN-ya - another sexy, unpronounceable word) is the national drink of Brazil. It's made of: lime, sugar, and cachaça. That's all. So, you might think - if cachaça is brazilian for rum, and a caipirinha is just cachaça, lime, and sugar - isn't that just a mojito, without the mint? I once thought this, too. And I was wrong.

See, because of the whole being distilled from fresh sugarcane juice thing, cachaça (according to the leblon cachaça website) has a "fruitier, fresher nose" and "distinctive vegetal notes remniscent of tequila". Well, I don't know what a nose is supposed to taste like, but I think this calls for...a taste test!

First the smell:
Rum: sweet, boozy, clean.
Cachaça: it smells like tequila. That's what I keep thinking of.

Then the taste:
Rum: Probably my $12 bottle of Baccardi was not really intended for sipping. But here are my impressions: Sweet, warm, almost like baked goods. Nice alcohol burn. This is hard liquor, after all.
Cachaça: Starts out sweet, like the rum, and then explodes into a whole bouquet of...something. (I'm seriously thinking about becoming a sommelier, if only to enlarge my vocabulary to describe taste sensations.) A bit smoky, a bit vegetal - it doesn't taste quite like tequila, but it's got that little extra something that makes tequila not quite as well-behaved as the other liquors. It's rich, robust, and unabashed. Like rum, but...manlier.

Lastly, because your cachaça education would not be complete without it, I give you...the caipirinha.

To start: take a lime and slice the ends off. Cut it in half, and remove the pith from the middle. (This part is bitter, so removing it will make for a sweeter drink.) 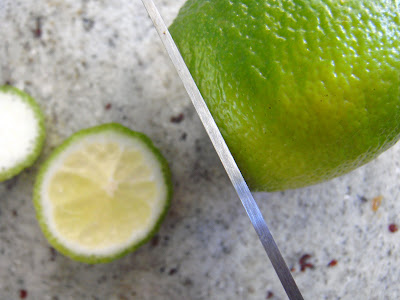 Cut the halved lime into four slices, and put them in a glass, along with two teaspoons of superfine sugar. 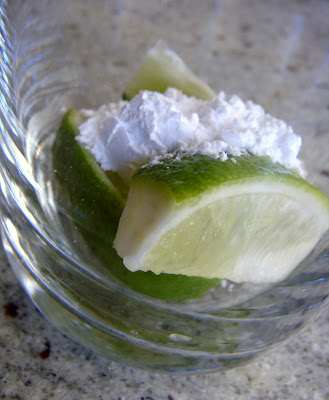 Muddle the limes and sugar together until the limes are juiced. Fill the glass with crushed ice - 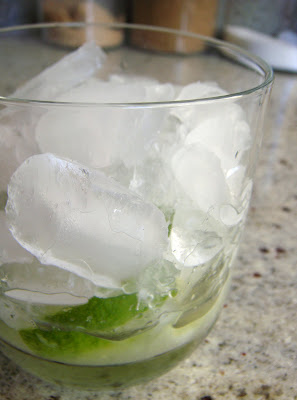 And add 2 oz of cachaça. Give it a couple of good stirs, and you're ready to start savoring.

Verdict: The lime is a good compliment to the unusual taste of the cachaça. Not quite like a margarita, not quite like a mojito...you may just have to try it for yourself.
Posted by Nancy at 7:26 PM
Email ThisBlogThis!Share to TwitterShare to FacebookShare to Pinterest