Although none of them are rocking the speakeasy feel quite as hard as PDT, the NY cocktail den with an entrance in the back of a phone booth, all the places we went felt a little bit...tucked away. Secret. Special. Like you were cool and in-the-know just for getting in the door. 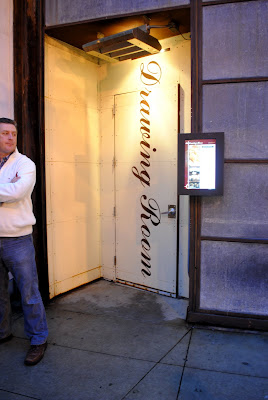 Sarah, Rebekah and I started off our very first evening in Chicago at the (relatively conspicuous) Drawing Room, a basement hideaway with an entrance tucked between a club and a little French restaurant. We got there around 7 PM on Saturday night, just in time to stake out some prime spots at the bar. From there, we could watch our cocktails being crafted by some of the world's best bartenders (head bartender Charles Joly won a James Beard award in 2011, which is kind of a big deal), and also check out the scene. 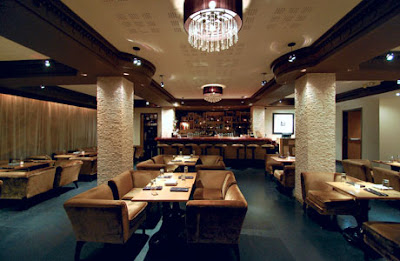 image: esquire.com.
From the photos I found online, I was a little concerned that the decor would be a bit high-dollar Holiday Inn, but I couldn't have been more wrong. The Drawing Room feels loungey, intimate and wonderfully grown-up, like the kind of place you always imagined adults hanging out when you were little and couldn't wait to grow up. The space is a long, low room filled with plush furniture - it's modern but warm, fancy but not fussy. The perfect backdrop for for a night on the town with some good friends, and some very good drinks.

Let's talk about the drinks.

Normally, I feel pretty in my element when perusing a cocktail menu. Strange spirits, like cachaça, Fernet Branca? These do not phase me. I even know what a shrub is. But the menu at the Drawing Room threw even me for a loop, and that's a good thing. Cocktail experimentation with wild and wonderful ingredients? I love. And, it turned out, a lot of the things on the menu I didn't recognize because they were local spirits made in and around Chicago. This, I love even more.

Right off, Sarah asked me - what is Malört? Maybe a kind of whiskey? - I told her, totally flubbing. And then I remembered - Malört is that liqueur. Famous for tasting like tires, and for, well, being absolutely repulsive. People who taste Malört for the first time are usually so disgusted that they make what is called a Malört face, an expression of total disgust that is often captured by their friends and cataloged on this flickr site. Looking at it will give you a pretty good idea of what Malört tastes like to the first-timer.

This strange liqueur tastes like wormwood (also present in the extremely potent and supposedly hallucinogenic Absinthe), is freakishly bitter, and, I was told by Billy Helmkamp, one of the co-owners of the Whistler, is sort of the national spirit of Chicago. Seriously. There's even a Chicago flag on the bottle. Malört is to Chicago what Fernet Branca is to San Francisco. People in Chicago really, really love it. And, sure enough, ever bar I visited after the Drawing Room had a bottle of this stuff hanging around. Having seen all the faces on the internet, I was, of course, anxious to taste it for myself. Our bartender Sergio, whose service was impeccable, offered to pour me a bit so I could try it. I wanted to like it so badly. A taste for Malört is like the ultimate badge of cocktail snobbery; it's loved by hardcore cocktail enthusiasts and hated by everyone else. I...didn't like it. At all. In fact, I thought it was one of the foulest things I've ever tasted. Like rubbing alcohol, with a lingering aftertaste of pure hate. 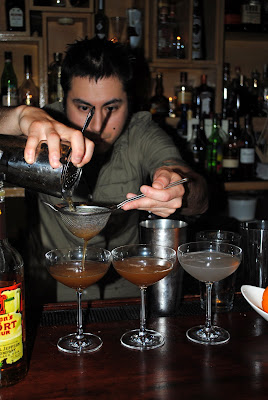 Sergio plying his craft. Witness the Malört to the left.
Billy also told me that it takes until your thirties for the tastebuds that detect bitterness to fully develop, so you may not like bitter things until then. I am 27, so maybe my love for Malört is just waiting for my 32nd birthday to fully blossom. Rebekah, who is, for the record, younger than I am, thought the Malört "wasn't so bad". Perhaps she has a more advanced palate than I do? I am deeply ashamed. (Sarah can't actually taste anything at all, so to her the Malört just tasted like booze.)

I ended up ordering a Cake or Death, because how could you not order a drink with such a fantastic name? (And kudos to our man Sergio for pointing me to this Lego Version.) I'm afraid I can't do it justice in words - it tasted a a little bit like coffee, a little bit bitter, and mostly unlike any other drink I've had before. This, Sergio said, was exactly what they were going for, and they certainly achieved it. I drink a lot, and I am always looking for the strange. This was certainly strange. I'm not sure I liked it (like as in, I would readily order another one), but it was definitely interesting. Rebekah, of the advanced palate, fell in love with the Cake or Death, and agreed to trade me the last of my drink for the remains of her Nooner. People who have drunk with me might be aware of my love affair with bourbon, and the Nooner was near perfect - a wonderful little bourbon cocktail, with maple syrup for just the right amount of depth. The Cake or Death. Nooner in background.
Sarah has a condition called anosmia, which means that she cannot smell at all: all of her taste sensations come from her tongue. (Sweet, sour, salty, bitter, and umami, if you believe in that kind of thing.) This makes her the perfect barometer for balance in cocktails - Sarah is never swayed by taste associations. She only tastes the most vital things. Sarah bravely ventured off the menu and asked for a cocktail that was "light and refreshing". Sergio delivered, with a drink made from gin, lemon, cherry heering, and creme de violette. For the gin, he chose North Shore distillery's No. 6, a (locally produced!) gin that is very lavender and citrus-forward, to compliment the floral flavors in the drink. Sarah liked it, and so did we.

We decided to linger for another round, drawn in by the drinks and the atmosphere. Sarah's Floradora was definitely the best drink this round, but we all left happy - a wonderful start to our adventures in Chicago.
Posted by Nancy at 7:24 PM
Email ThisBlogThis!Share to TwitterShare to FacebookShare to Pinterest