One of Chicago's best cocktail bars almost wasn't a bar at all.

Most bar owners decide that they want to open a bar, and then search for an appropriate space. The owners of Chicago's Whistler did it the other way around - they found the space, and then figured out what to do with it. They decided they wanted to open a live music venue - one that would sell wine, and beer, and maybe a few mixed drinks. Well, on the night of the very first concert, the cocktails were a smash hit. A star was born. 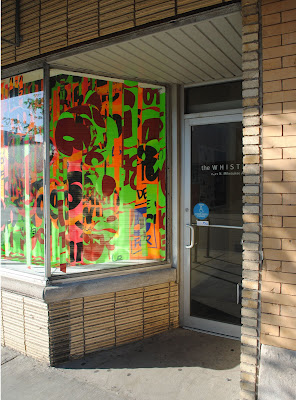 Like other Chicago cocktail bars, the Whistler is a little hard to spot. Look for the changing art installation in the store window in front.

Sarah and I showed up at the Whistler at 6 PM on a Monday night, right when the place opened. Not exactly prime time for any bar - in fact, we were the only customers there. "Could you print out a few menus?" Billy Helmkamp, one of the co-owners (I later discovered), yelled to the only other employee in the bar. Print the menus?, I asked. You have a different menu every day? Yes, Billy told me - a new menu is printed every day the bar is open, reflecting the availability of the different kinds of local produce they use in their drinks. Right away, I knew this was my kind of place. 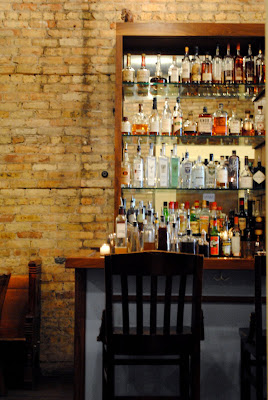 The Whistler is really serious about local ingredients. They get a lot of their produce from a Chicago-area nonprofit that teachers inner-city kids how to garden, and like The Drawing Room, they're always looking for locally made spirits. One of their sources, Billy told me, is a Chicago-area attorney who makes cocktail bitters in his spare time. He distributes them to local bars, free of charge, apparently. He's in it for the love of the game.

But the Whistler, at its heart, is a live music venue. That's what the owners intended when they opened it, and they have live music every single night (although Sarah and I had to jet after about an hour and unfortunately did not witness this). This makes it a sort of hipster's paradise - laid-back location, delicious cocktails made with local ingredients, live music. Although I'm unable to confirm or deny the reports from Yelp that the Whistler is always full of painfully trendy, bearded types, I can report that, when Sarah and I were there, 100% of the other clientele (consisting of...1 guy) had beards. 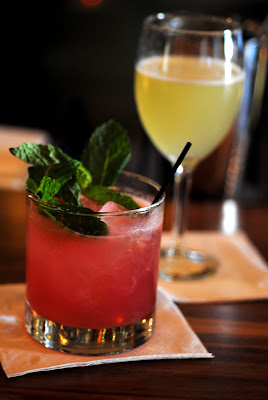 While staying true to its roots as a live music venue, the Whistler is also an excellent place to get a drink. I had a Pago Pago, a classic tiki cocktail with...chartreuse?, which was as delicious as it was unexpected, and Sarah had a Southern Exposure (pisco, mezcal, lime, raspberry syrup, and allspice dram), whose pink hue and delicious smoky flavor made me exceedingly jealous. After only a single round of drinks and about 45 minutes of chatting with Billy about beer, booze blogs, and bitters, I was very sad to leave. If you live in Chicago (or are just visiting), do yourself a favor and soak up some live music (and some very good drinks) at one of my new favorite bars, the Whistler.
Posted by Nancy at 10:30 PM
Email ThisBlogThis!Share to TwitterShare to FacebookShare to Pinterest