Everything You Ever Wanted to Know about Egg White Cocktails

I have a confession to make: until a few months ago, I had never made a cocktail with egg white. Apartment Therapy had an "Around the World" themed happy hour, and I volunteered to make Pisco Sours (for Peru, naturally) without thinking that I might be in a little over my head. Fortunately, my Pisco Sours (pisco, lemon, simple syrup, egg white, angostura bitters) turned out beautifully despite my lack of experience. This was mostly thanks to the Egg Beaters eggs whites I used, which, despite the name, do originate from actual eggs. They just come in a carton, not a shell, which is perfect if you want to make 50 drinks at a time, or you're just really lazy. The Egg Beaters egg whites don't need a great deal of convincing to produce a nice, creamy foam. With traditional egg whites, though, you're going to have to work a little harder. 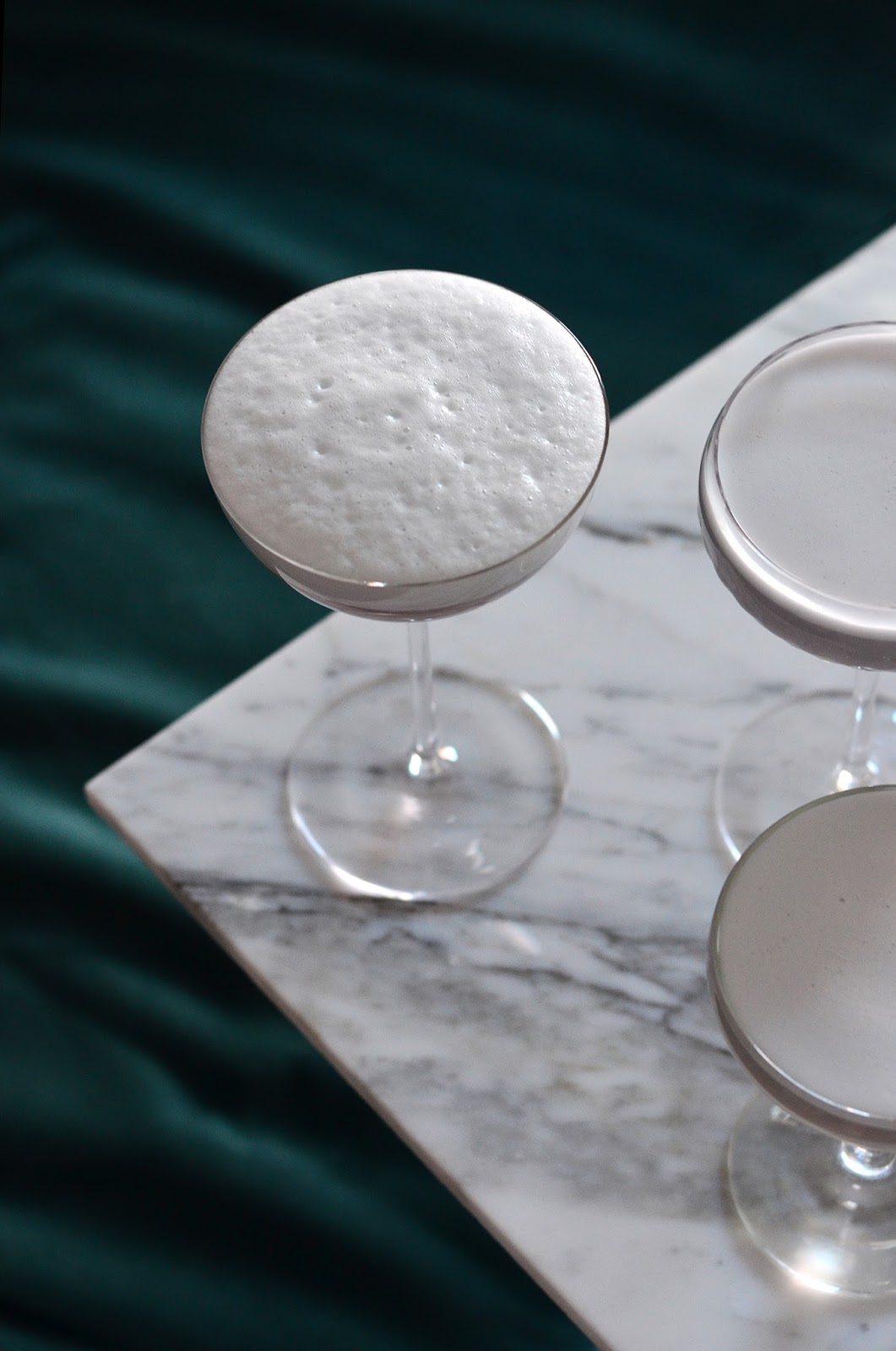 A few months later I went to the Pegu Club with Ariel, and she ordered a drink with egg white in it, and I watched the bartender extract the egg white from an egg, kind of like this, and I was like, I could do that. At the time, I was just starting to get into the Blue Moon cocktail, so I went home and made one with an egg white, and it was so good that for about two weeks I didn't drink anything else. (The egg white, if you're wondering, adds a nice, creamy feel to the drink, but no discernible eggy flavor. That is, unless you mess up on extracting the egg white and get a little yolk into your drink, in which case I make no guarantees.)

The difficultly, I soon discovered, of making cocktails with for real egg whites and not Egg Beaters was that getting a nice thick layer of foam was a lot more work. The first cocktail I made the traditional way: put all the ingredients in a shaker, add ice, shake, strain into a glass. I shook it for about 45 seconds, which I feel is the longest you can shake a drink without it getting ridiculously watered down. Still, the flavors felt a little weak. And although the egg white gave the drink a nice mouthfeel, the layer of foam that I created was unremarkable. But what could I do? Shaking the drink longer would just dilute the flavors even more. 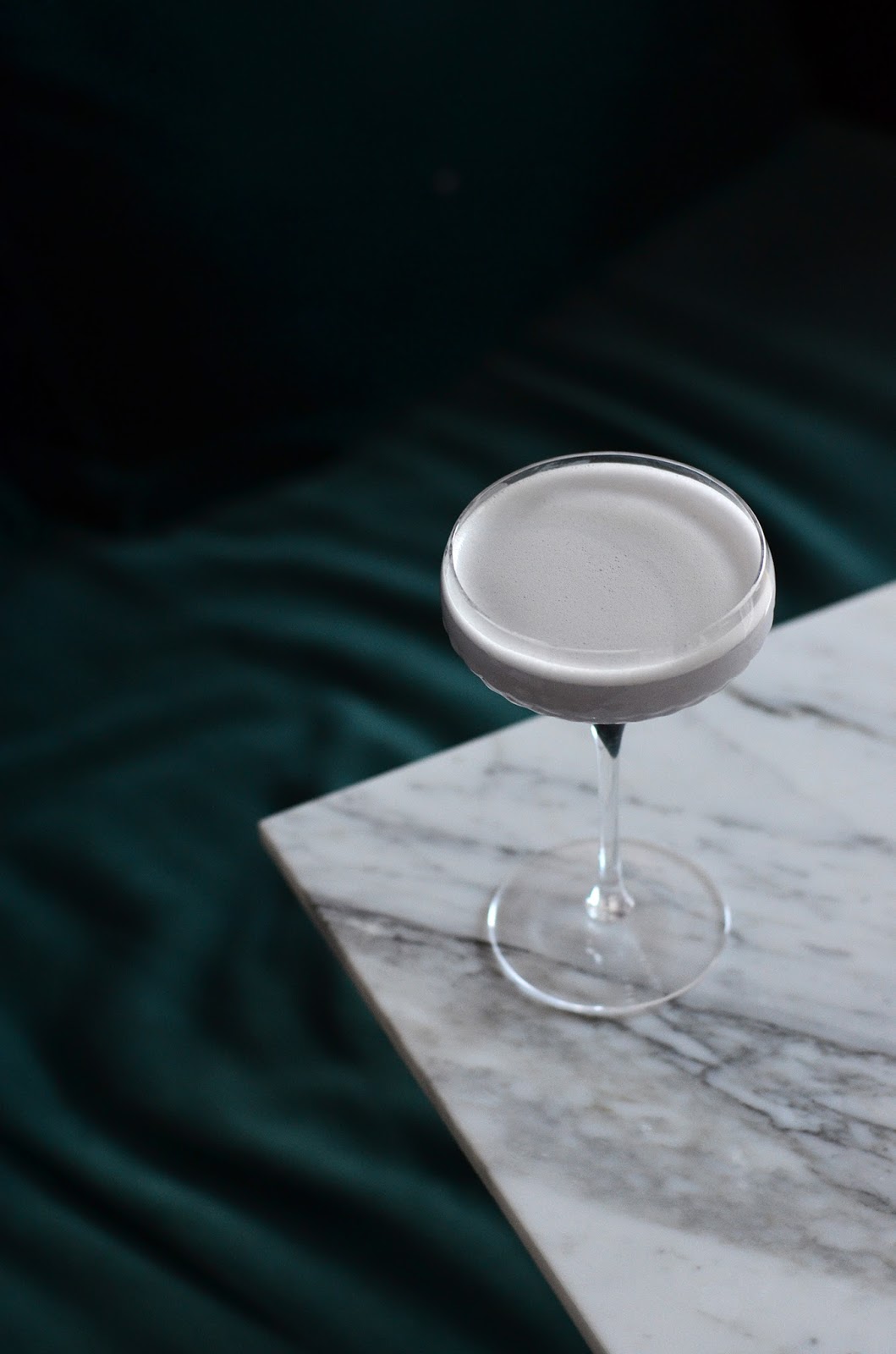 This is a Blue Moon cocktail, made with a dry shake.

Fortunately, bartenders have developed techniques for getting around this. One is called the dry shake. For a dry shake, you combine all the drink's ingredients in a shaker, without ice, and shake them for about a minute. (This may seem like a really long time, but it's necessary to get a nice, dense froth from your egg white.) THEN you add ice to the shaker, shake as your normally would, and strain into a glass. 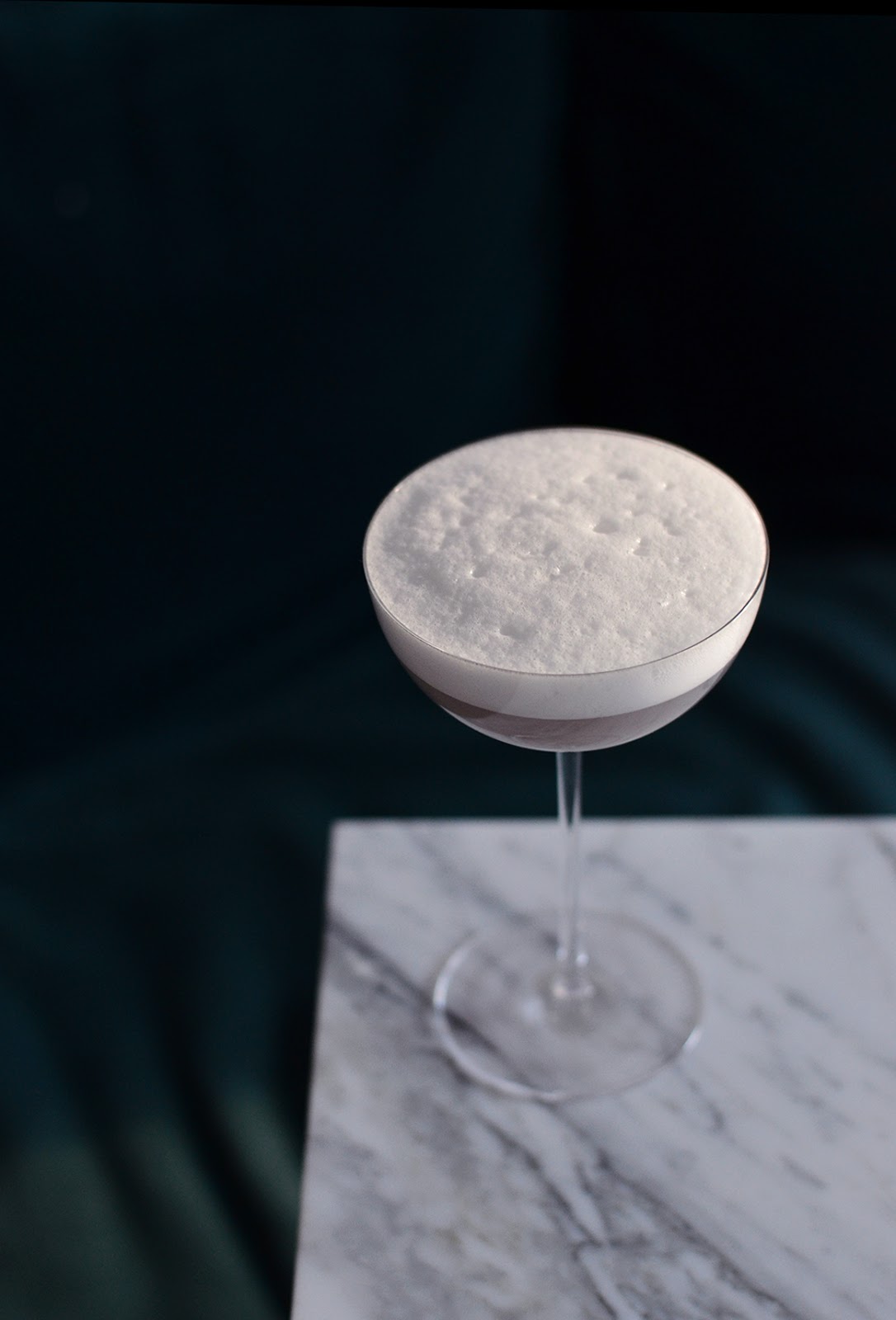 Then there's a third way of shaking an egg white drink that some bartenders favor, called the reverse dry shake. For a reverse dry shake, you add all the ingredients to a shaker, with the exception of the egg white. Then you add ice and shake as you normally would. After that, you strain the cocktail into a different shaker glass, add the egg, and shake for a minute. 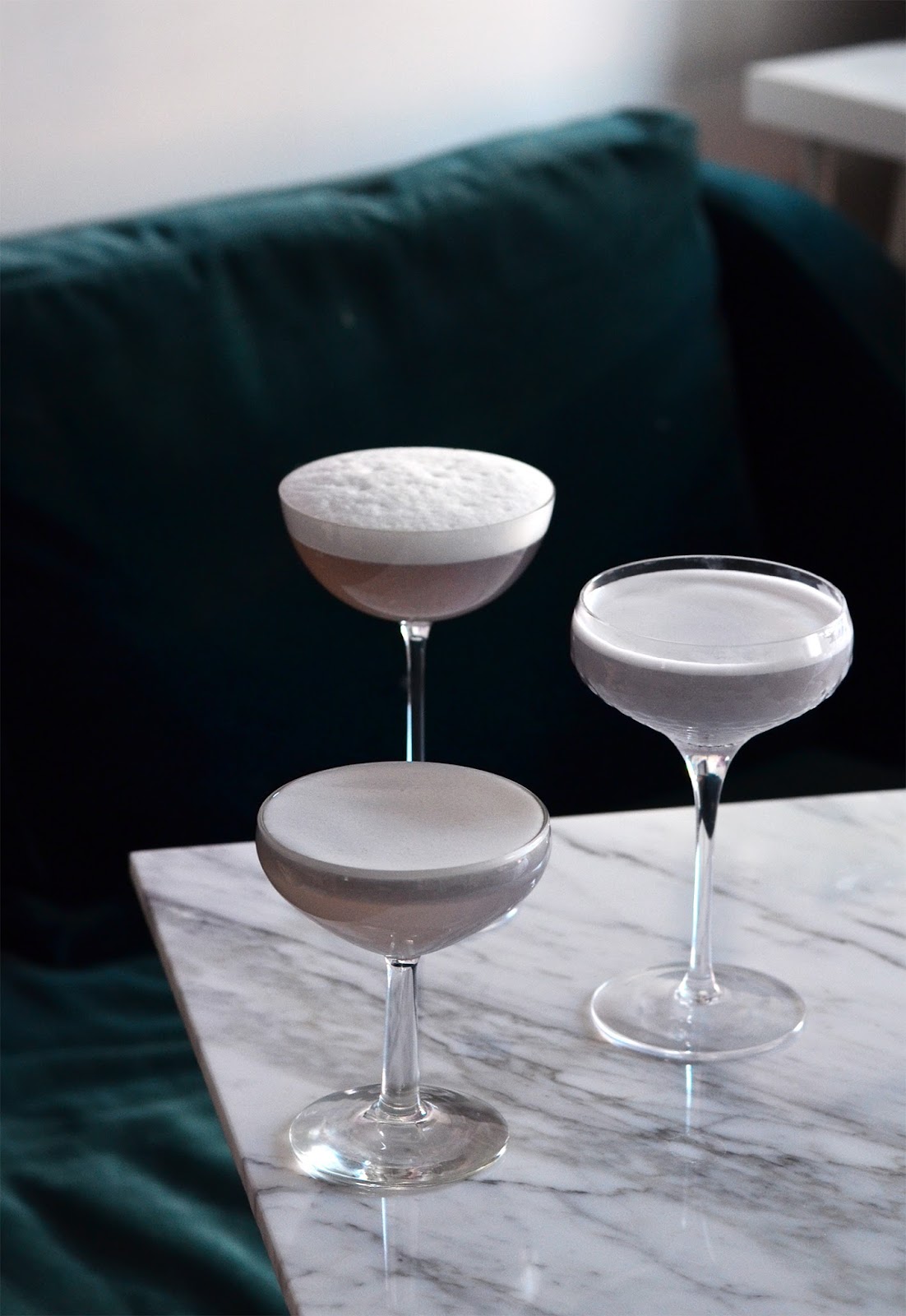 The coupe glass in the front has an egg white cocktail shaken the traditional way. On the left is the reverse dry shake drink: dry shake on the right.

Each of these three techniques produces a remarkably different drink. As noted before, the egg white cocktail shaken the traditional way tastes just fine, but its looks aren't anything to write home about. The dry shake produces a drink with a rich, creamy opalescence, almost like milk. Within a few minutes it settles into two layers: foam on the top, opaque, creamy cocktail below.

The reverse dry shake produces by far the most striking drink, with a layer of foam so dense you could rest a quarter on it. The foam is fluffy and thick, and particularly distinct from the drink below. This is, presumably, what all those folks on Instagram are doing to get that big, dramatic layer of foam. The only thing I don't love about the reverse dry shake cocktail is the experience of drinking it, which feels almost like drinking a normal Blue Moon through a nest of foam. So, unless I'm trying to impress people on the 'gram, I'll stick to making my cocktails with the plain old dry shake technique. But don't let that keep you from trying them all. 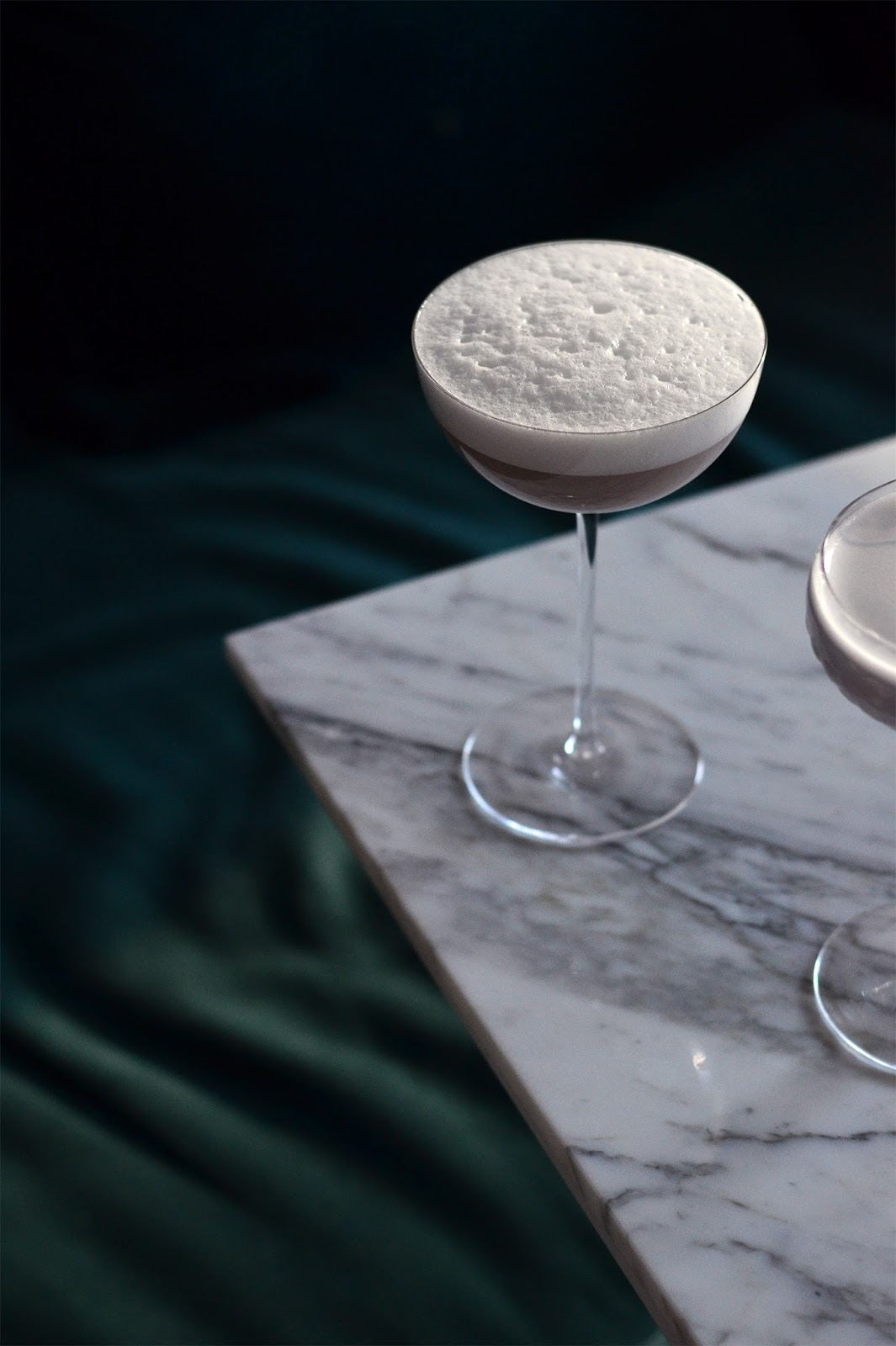 Here are three ways to make a classic Blue Moon cocktail with egg. The Blue Moon is a sort of cousin to the Aviation, another favorite drink of mine, although the Blue Moon is a bit more violette-forward, which I don't mind at all. But one difficulty of all the shaking and re-shaking is the fact that if you shake violette too much, it turns from a nice pretty purple into an unappealing shade of grey. (This helps explain why a good Aviation cocktail is a bluish-grey, rather than bright purple.) This is why, in the drinks that call for double shaking, I recommend adding the Violette on the second pass. It's also why, when you look at the photo of the three drinks together, you'll see that besides having different densities of foam they're also all slightly different colors. Science is fun! It's also delicious.

Combine all ingredients in a shaker. Add ice, and shake for 45 seconds (or a minute, if you're really comitted) and then strain into a glass.

Blue Moon cocktail (reverse dry shake)
Add the gin and lemon juice to a shaker. Add ice, shake and strain into another cocktail shaker. THEN add the violette, and the egg white, and shake (sans ice) for another minute.
Posted by Nancy at 2:47 PM
Email ThisBlogThis!Share to TwitterShare to FacebookShare to Pinterest