This week I did something very atypical, which is - I made a fantasy football team. This would seem, at first glance, to be absolutely foolhardy, since I know next to nothing about football. And seeing as the season has not actually begun yet, there are still plenty of chances for my team to be an epic failure. But, on Tuesday, with a lot of help from the football gal, I participated in my first draft, and now I've got what is (I think) a pretty decent team. I have Chris Johnson, and Steven Jackson, and Tom Brady (hot!)** and some guy named Jermichael. (As a person who strives to create cocktails which are innovative mashups of familiar ingredients - I appreciate this name.)
So, what I've learned thus far is: having a good team is really important. The other day I came across a cocktail that teamed up:
1. St. Germain
2. a margarita
3. cucumber
4. Fever Tree Bitter Lemon Soda*

*What?? This is a mixer that was recommended by loyal reader Rosann way back in the Pimm's Cup days. I had been wanting to try it.

That, my friends, is a good team. So, in (hopeful) anticipation of all the glorious beatings that will soon be delivered by my fantasy football team***, I mixed up one of these puppies. 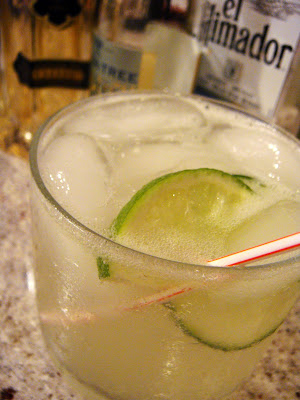 In a shaker, muddle the cucumber slices with a splash of the simple syrup. Fill the glass with ice and add the remaining ingredients, except for the soda. Shake, strain into a glass over ice, and top with soda. You don't want to add too much soda or the drink with get too bitter. I poured mine into an old-fashioned glass with a handful of ice in the bottom and then filled with the soda, and that was just perfect.

Verdict: Sweet, summery, and delicious. Surprisingly, tastes not very much like a margarita. Tastes not very much like booze, either (although I sometimes worry that my definition of "tastes like booze" is not quite that of a normal person, since many drinks that I would describe as simply "tasty" are described by other people as "really, really strong"). Not that that's a bad thing. There's this delicate interplay of lime, cucumber and tequila flavors going on, and the soda makes it light and refreshing. With a lineup like this, it's hard to go wrong.

**Update: Tom Brady is still hot, but my gosh, what the hell is up with his hair? Get a haircut, Tom. You're embarrassing the team.
***Another Update: As of monday night, the first of these beatings was officially delivered. Cheers.
Posted by Nancy at 11:31 PM
Email ThisBlogThis!Share to TwitterShare to FacebookShare to Pinterest