MxMo the First: The Summer Old-Fashioned 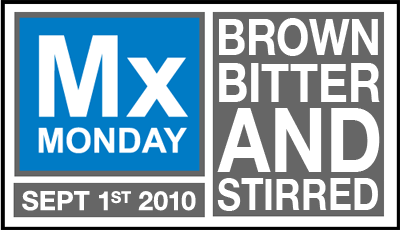 Before there was the Backyard Bartender, there was Mixology Monday. Every month, mixologists from all over the globe (I am not lying - this month there's one from Germany) create drinks to fit a particular theme. I stumbled across the site one day while looking for a recipe and was immediately delighted and awed and overwhelmed. It was like I was a cocktail adventurer standing on the edge of the cocktail Grand Canyon - it was so beautiful, and there was so much out there, and I could not possibly explore it all. But I wanted to try.

This is the first mixology monday since the inception of the backyard bartender (so I guess sometimes it's not every month), and the theme (and the host blog) is Brown, Bitter and Stirred. Make a drink that is brown, possibly because it is made with some kind of brown liquor, and...tastes bitter and is stirred. (I might have cheated a little on the "bitter" part. I am still learning to like bitter things. I do not yet have the palate to appreciate, say, campari, which other people seem to think is wonderful. But my cocktail contains bitters, so...that's a start?)

Of course when I think "brown", I think bourbon, my very favorite of the brown liquors. Problem is, when I think bourbon, I do not think summer. More like, sitting around a campfire trying desperately to stay warm. That's what bourbon is to me. Unfortunately, although in some places the weather may have started to resemble that lovely season they call "fall", here in Houston it is still hotter than hell. The other day I got into my car and the thermometer read 112 degrees. I think the last time I saw a thermometer reading 112 degrees was at the bottom of the Grand Canyon. (Or, y'know, just last summer. It gets hot here.) (Also: second Grand Canyon reference in one post. I love the Grand Canyon.) 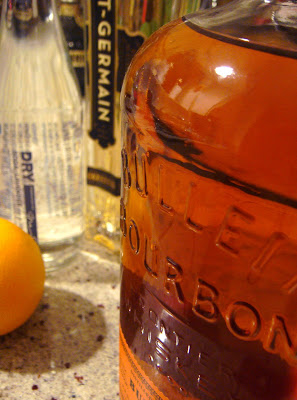 You know what else I love? Bourbon.
So how could I summer-ify bourbon? Here was my thought process: I have, in the works (meaning: the idea is in my head), another drink involving apples and lavender, because the internet told me this was a good flavor pairing and I am dying to try it out. I thought about adding bourbon to the mix, since I knew that bourbon and apples were good together - Dale Degroff says so. (Also: bourbon + apple cider is a winner.) So the only question was - bourbon and lavender? Well, a google search yielded enough intriguing results to make me think I was on the right track. (The bourbon french toast with lavender butter? Must. try. now.)

I wasn't really sure about trying to pass off a drink with apple in it as "bitter", so instead I turned to our old friend, the old-fashioned. (The exact recipe for an old-fashioned is one of those things that cocktail geeks always argue about, but everyone seems to agree that the basics are: bourbon, sugar, orange, (in some capacity) and bitters.) What I was going for was an old-fashioned that was was light and a bit floral, but still tasted like an old-fashioned. After a few tries (okay, maybe a lot of tries) I got it right. Here it is:

*I know I'm a little behind the game, but I just discovered St. Germain and I have been putting it in pretty much everything. This blog calls it "the bacon of the cocktail world" (because it goes with everything), which I think is both funny and true.
**Tried this originally with muddled lavender greens from the garden and was unconvinced. (My lavender, the "Goodwin Creek" variety, stands up well to our crazy heat but inexplicably never blooms, so all I have to work with are the greens.) So the only local ingredient here is the garnish. I promise to try harder next time.

Mix all ingredients but the soda in an old-fashioned glass full of ice. Stir lovingly for 30 seconds. Add the soda. Garnish with an orange slice and a sprig of lavender. 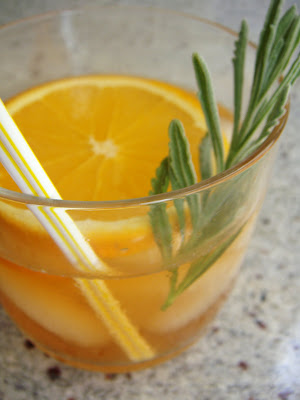 Yum.
Posted by Nancy at 9:32 PM
Email ThisBlogThis!Share to TwitterShare to FacebookShare to Pinterest