I have become the sort of person who googles things like "sage flavor pairings". Because I recently bought a sage plant, and if I can't make it into a drink it is basically useless to me. Some suggestions were: sage and plums. Interesting. Sage and rye whiskey. More interesting. But what about...sage and plums and rye whiskey? The plot thickens.
So here's what you need to know about rye whiskey: Rye whiskey (sometimes referred to simply as "rye") is kind of a big deal. It shows up in a lot of old cocktail recipes, and has recently been re-discovered by the cocktailing elite. (Apparently rye whiskey has a long and storied history - according to this guy, it was distilled by George Washington at Mount Vernon.) It tastes like whiskey but different, i.e., in rye, the spicy flavors present in the whiskey are sharper and more distinct. It practically begs to be paired with bitters, which is probably why the most famous cocktail made with Rye Whiskey, the sazerac, includes a healthy dose of Peychaud's. (Sazerac also happens to be the brand name of a kind of rye.) 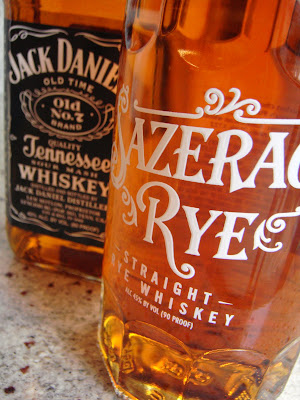 Whiskey and Rye whiskey go head-to-head.
I bought my first bottle of rye whiskey a couple weeks ago and set to work on a sage-y cocktail. Here's what I came up with: 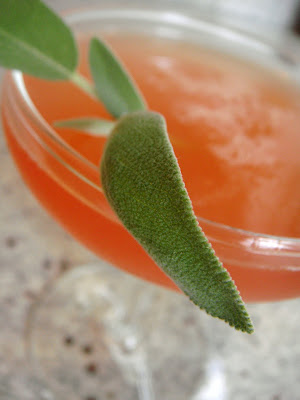 Verdict: Wow. This is very, very good. The plums, sage and rye are such a natural pairing that it's hard to tell where one flavor ends and another begins. It's sweet and smooth and herbal and complicated. Adding a couple dashes of Peychaud's bitters will add an interesting, licorice-y dimension to it. (Sounds weird, but - try it.) Just don't drink it too fast. Rye whiskey is almost 50 percent alcohol. I'm gonna go sit down.
Posted by Nancy at 9:21 PM
Email ThisBlogThis!Share to TwitterShare to FacebookShare to Pinterest