The original recipe for the Pirate Berry Infusion comes from this book, which has lots of recipes for infusions using seasonal fruit. Apparently this is a book is for people who really, really like drinking, because the original recipe calls for two 750 mL bottles of rum, which comes out to...a lot of rum. I'm pretty sure that with nearly 2 liters of berry-flavored rum I could make a daiquiri for everyone I've ever met in my entire life. 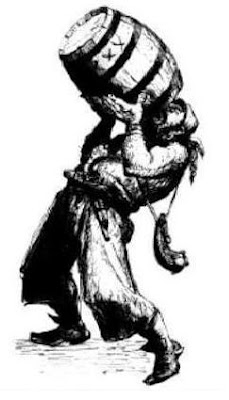 Or just one daiquiri for an actual pirate.
So I cut the recipe in half, and made a few other tweaks, too - I substituted cinnamon sticks for cinnamon syrup (mostly because...I was too lazy to make a cinnamon syrup), and I used a little bit less fruit than the recipe called for and cheated by muddling it instead. The original recipe didn't call for any muddling, which I thought was odd because, well, blueberries are not infusing into anything in any big hurry unless you help them out a little bit.
It turns out that infusions are a lot harder to make up (or tweak) on the fly than your average cocktail. (Most cocktails don't require you to invest a week and an entire bottle of liquor.) I managed to screw this one up twice - the first one was too sweet (I forgot about it and let it infuse too long - whoops), and the second one had hardly any flavor at all. (I think the berries weren't fresh enough.) Finally, on the third try, I manged to get it Just Right. 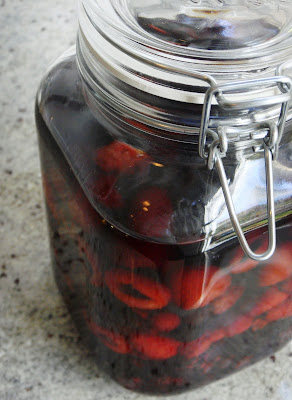 Pirate Berry Infusion
1 750 ml bottle dark rum (I used Gosling's)
1 pint raspberries
1 pint blackberries*
1 pint Texas blueberries
1 cinnamon stick, broken in half
1 tsp fresh-squeezed lemon juice**
*These were still available locally as of the making of infusion number one...but sadly, not anymore.
**Acts as a sort of preservative, without adding any discernable flavor.
Place the cinnamon stick in the bottom of a glass jar, and layer the berries on top. Muddle the berries lightly as you add each layer - emphasis on lightly. The goal is to break the berries up a little so they release their flavor into the rum, not smash them into a paste. You'll want to muddle the blueberries the most and the raspberries the least, because they are already kind of smooshy and will succumb easily. When you're done muddling, add the rum and the lemon juice. Seal the jar and let it sit in a cool, dark location for a week, or a few days longer if you want a stronger berry flavor. You can always taste the rum to check its progress. (I'm sure you don't need to be encouraged to do this.)
Once the appropriate waiting period is finished, strain the rum into a bottle (it will be a nice cranberry color - purdy), and you're ready for:
The Pirate Daiquiri
2.5 oz pirate infusion
.5 oz fresh squeezed lime juice
.5 oz sugar syrup
Stir all ingredients together in a glass full of ice. After stirring, let the glass sit for a couple minutes - you want to make sure the ice melts into the drink a little to mellow out the booze. (Or you can use a shaker and eliminate the waiting.) Strain into a martini glass, garnish with a cinnamon stick if you're feeling fancy, and enjoy. 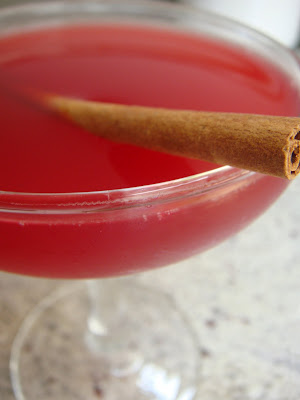 Verdict: Sweet and berry-licious, with just the right amount of sour from the lime and a hint of cinnamon to boot. Yum.
Posted by Nancy at 10:58 PM
Email ThisBlogThis!Share to TwitterShare to FacebookShare to Pinterest