Ever since I first had a "beer-tail" at Beaver's Icehouse, one of my favorite places in Houston, or the world, I have longed to create one of my own. It seemed so simple, and yet so terribly difficult - I know which liquors go together, but what goes with beer? I started with sloe gin, beloved of Anglophiles and snooty mixologists, and Lone Star, beloved of me, while floating down the river. While some friends had suggested that 'Down the River With Nancy' would be a delightful name for a cocktail, I was stuck on 'Redneck Mother', and sloe gin (which is red) and Lone Star (which is a little redneck) seemed to fit the bill. To this I added ruby red grapefruit (newly in season - buy local!) and ginger beer. I confess I was inspired in this by the Shiner brewery's summer seasonal, the Ruby Redbird, which is (was) brewed with ginger and grapefruit. So it's unsurprising that the finished product is a bit reminiscent of Shiner's summer brew - but that's not a bad thing. I could use a little remembrance of summer right now. Redneck Mother
1 oz Rio Star ruby red grapefruit juice (fresh-squeezed!)
.75 oz sloe gin (Get the Plymoth, if you can. It's a bit hard to find, but completely worth it. If you can't hunt down the Plymoth, use a bit less, as other brands tend to be sweeter.)
Lone Star beer
Ginger beer

Add the sloe gin and grapefruit juice to the bottom of a pint glass (or mason jar). Fill the remaining portion of the jar halfway with Lone Star and top with ginger beer. Cheers. 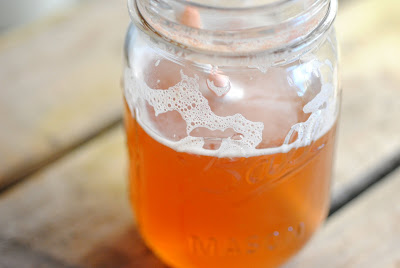 Posted by Nancy at 11:54 PM
Email ThisBlogThis!Share to TwitterShare to FacebookShare to Pinterest