What the Heck is Ginger Beer?

Ginger beer is like ginger ale, but not as sweet and waaay spicier. Drunk on its own, I find all that ginger to be a bit much, but ginger beer does figure in some pretty great cocktails.

Contrary to what the name might imply, ginger beer doesn't contain any alcohol. It was once possible to buy alcoholic ginger beer, and you can still get it in England, I hear, but here in the states it hasn't been available since the mid-20th century. 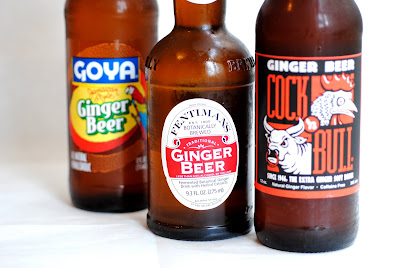 Some different kinds of ginger beer. Hint: the Fentiman's is the best.
Can I substitute ginger ale for ginger beer in a cocktail recipe?
No, not really. The ginger taste will be a lot weaker.

Where can I find ginger beer?
In Houston, I get mine at Central Market. Spec's also has a bunch of different varieties (at least at the downtown location.) Outside of Houston, I'd try a liquor store or Whole Foods. They have this product, which is called "ginger brew" but hey, close enough.
Posted by Nancy at 4:18 PM
Email ThisBlogThis!Share to TwitterShare to FacebookShare to Pinterest