A few weeks ago, Houston was in the sway of something resembling Winter - the temperature dropped below forty for almost two weeks, the sun did not come out, and a couple of days it even FROZE and everyone in our lovely city lost their collective shit. Of course I'm also a total wimp when it comes to cold weather, because hello, I live in Houston, so I stayed at home and drank hot tea and took long hot baths and dreamed of summer and sangria. 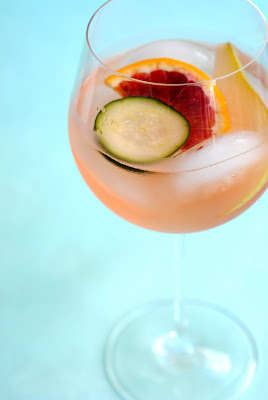 During which time I thought, hey, I don't think I've ever made a sangria with cucumber. It seemed like an interesting challenge - the savoriness of cucumber in a sangria. I though about the Mr. Stair, the pretty green pear sour that I had to puree a cucumber to make. With that as my inspiration, it wasn't long until...

Combine all ingredients in a pitcher and chill overnight (or for at least 8 hours). (Most sangrias get better as you continue to infuse them, but you actually don't want to steep this one much longer than 8 hours or the cucumber will become too pronounced.) Serve in a glass over ice.

Verdict: I did done good. Beautiful and crisp and fresh, with a lingering sweetness. Just the thing to tide you over until spring. 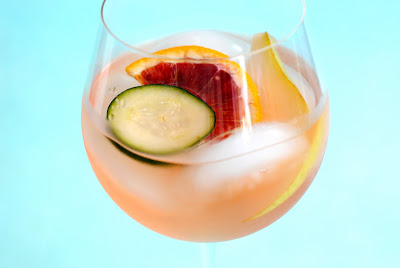 Posted by Nancy at 7:33 PM
Email ThisBlogThis!Share to TwitterShare to FacebookShare to Pinterest