Sometime last fall, I bought my first bottle of Mezcal. In the world of mixology, so I heard, Mezcal was the Next Big Thing. Elite bartenders all over the east and west coasts were going nuts for this stuff, even though it was supposed to be treacherously difficult to mix. (True story: I once asked one of the bartenders at the Yucatan Taco Stand, in Fort Worth, to make me a cocktail with mezcal, and he said the best way to do that would be to throw the mezcal in the trash and drink something else.) But still, I hoped to succeed where many before me had failed. 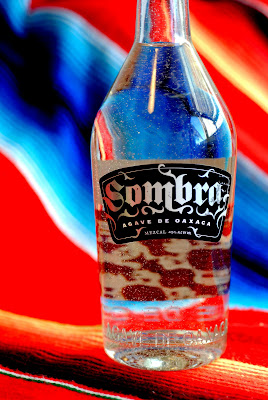 I experienced some serious intimidation pretty much as soon as I opened the bottle. I got a little whiff of tequila and a big ol' whiff of campfire. Which is quite appropriate, since mezcal is distilled from the fire-roasted heart of the agave plant. So what's the difference between tequila and mezcal? They're both made from the juice of the agave plant, but tequila (according to Mexican law) must be made from blue agave, and the hearts are steamed instead of being roasted.

It's a misconception that mezcal is "the one with the worm" - according to wikipedia, this began as a marketing gimmick in the 1940s. (The "worm" is actually the larvae of a moth that lives on the agave. Um...ew.) These days if you see a worm in the bottle it means it's probably not very good mezcal. The wikipedia article also says this: "Despite the similar name, mezcal does not contain mescaline or other psychedelic substances". Bummer.

Taste test time! I am tasting Sombra Joven mezcal. As you see in the picture.

Smell: Like tequila. And a campfire. And, very weirdly...a whole lot like my pediatrician's office. Really. I'm at a loss. You how smells conjure up memories? When I smell mezcal, I've five, and I'm hanging out in the waiting room, and once again I'm disappointed that all those other little bastards broke all the furniture for the little people house. Because that's what being sick is all about, when you're little: playing with someone else's toys. 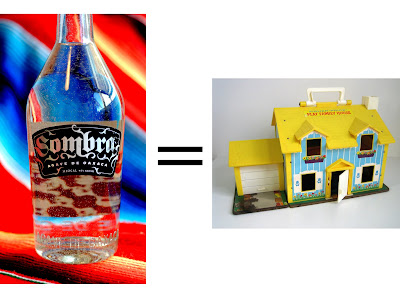 I can't explain it.

Before I made a good drink with mezcal, I made a whole lot of really, really bad ones. For example: tequila makes for a wonderful peach margarita, but add mezcal and you get the entirely underwhelming experience of drinking a vaguely fruit-flavored campfire. Maybe, I thought, the peach flavor was too weak. Mezcal needed a strong partner, so I turned to our friend the mango. I could taste the mango, but it mingled with the smokiness in my mouth to form a discordant symphony of nastiness.

I don't give up easily. But it's hard not to give up when your best effort is a cocktail that tastes like a tropical fruit with the disturbing aftertaste of your pediatrician's office. I thought about throwing in the towel. I could pour the rest of the mezcal down the drain, and I wouldn't have to tell anyone. I would be the only person to know what a dismal failure I was. Two things stopped me: 1. I am really stubborn, and 2. good mezcal is really expensive. 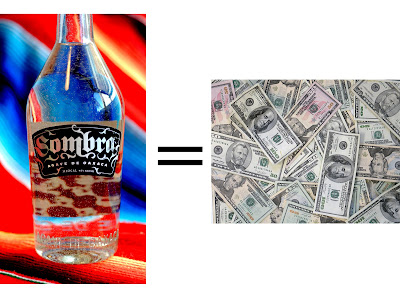 I searched the internet, hoping for inspiration, but everything I found either contained some bitter aperitif like Campari or Cynar (not really my thing), or was stupidly complicated, or was...a margarita. With mezcal in it. Which I already knew was gross, because of course I tried that. Then one day I ran across the menu of Mayahuel, a cocktail den in New York devoted entirely to tequila and mezcal. They had a cocktail made with mezcal, tequila, and pomegranate molasses. Pomegranate molasses...brilliant. It's strong, like the mango, but not too sweet. And rich enough to hold its own with all that smoke. It was a huge breakthrough. Angel choirs sang. It was as if the heavens had parted for a split second to let the light of cocktail wisdom shine down.

To my mezcal cocktail I added ginger - another strong, not-too-sweet flavor. (Plus ginger + mezcal came recommended by the great Dale Degroff. Although he also recommended the mango and we saw how that turned out.) Ginger beer, naturally, because mezcal needs something powerful. And of course, ginger beer made me think of the Moscow Mule, a totally famous classic cocktail. Okay, a moderately famous classic cocktail. 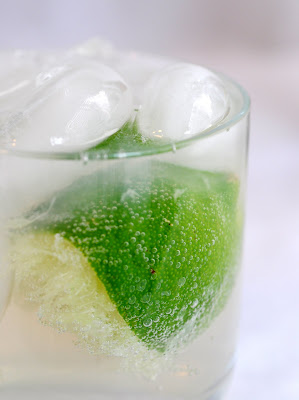 Squeeze the lime into an old-fashioned glass. (This drink is supposed to be drunk in a copper mug, but I didn't have one so I had to make do.) Fill with ice, add the vodka, and top with ginger beer. Spicy and refreshing.

So at this point I was going to talk about how the Moscow Mule was my starting point, and then maybe throw in a recipe for a Mississippi Mule (even though a Mississippi Mule has gin and cassis and lemon and no ginger beer and doesn't really have anything to do with these drinks at all), and then present my mezcal cocktail, called the "Mexico Mule", and call the post something cute like "a tale of three mules". Only, as I was writing it I realized that the word "mule" has come to have certain uh, other meanings, and calling a drink the Mexico Mule might be a little tasteless. So instead I have dubbed my creation the "whoa mama", because that's what you will think when you drink it. 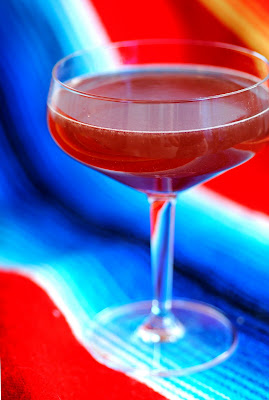 *You can find this at ethnic groceries or the trusty downtown Spec's. Or you can make your own, like I did. The stuff you make at home has the advantage of being A. deliciouser and B., prettier - the homemade stuff is maroon (whoop) whereas storebought pomegranate molasses is brown, which makes for a not so pretty cocktail.
**If you don't have mezcal, this is also pretty delicious with tequila. Although you'll be missing out on all that special smoke flavor.

Add all ingredients but the ginger beer to a cocktail shaker full of ice; shake and strain into a cocktail glass, then add the ginger beer. Alternatively, you can serve this drink in a highball glass over ice: add pomegranate molasses, mezcal, and lime juice to an ice-filled glass; stir for 30 seconds. Add the ginger beer and stir once more. The over-ice version will stay colder longer (obviously), but as the ice melts the smoky flavor will be less distinct. 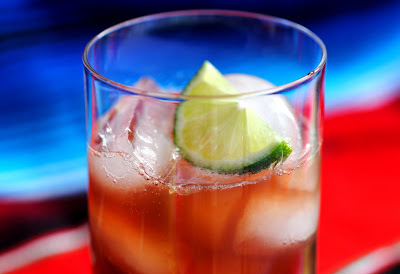 Verdict: Sweet jumping jehosephat, this is good. All the flavors blend together perfectly. It's like a coke, but full of BOOZE and AWESOME. (Sorry, propensity for all caps is leaking over from Bachelor Blog. Plus I am SUPER EXCITED about this drink.) Smoke and ginger and pomegranate and lime...HOLY CRAP, THIS IS SO GOOD. I'm so sorry, mezcal. Forgive me for thinking that you tasted gross and like a doctor's office. This is the cocktail that you were waiting to be mixed into all along.
Posted by Nancy at 5:10 PM
Email ThisBlogThis!Share to TwitterShare to FacebookShare to Pinterest