5 Classic Cocktails to Order "Off the Menu" at the Anvil.

Since this is a blog about drinking in Houston, after all, and I've already reviewed bars in New York and Los Angeles, I figured it's high time I tackled the Bayou City's burgeoning cocktail scene. And where better to start than at that flagship of Houston cocktail dens, the Anvil? So, if you're from out of town, or you're one of the 5 Houstonians who haven't yet discovered the Anvil, here's what to expect. 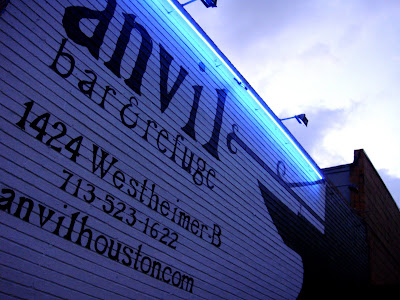 The Ambiance: Dark but not too dark, noisy but not too loud, and not too many decorations besides the jaw-droppingly huge selection of booze lining the wall behind the bar. Just how a bar should be. I think my favorite thing, though, about the atmosphere at the Anvil is the smells. I try not to admit this too often, but...I love the way bars smell. And the Anvil has the best smell of any bar I've ever been to - like spices and bourbon and campari and maybe a hint of tobacco. (And maybe cheese? Kassie said it smelled like cheese.) Whatever it is, it's interesting and manly and delicious and I love it. 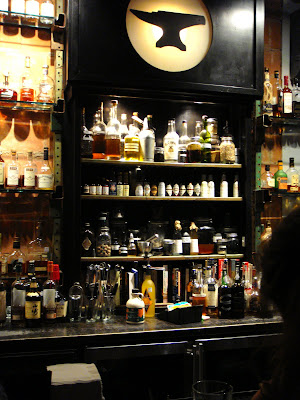 holy crap, look at all those bitters.
The Crowd: When people first told me about the Anvil, I envisioned it as a sort of exalted cocktail mecca, the kind of tucked-away place where serious booze enthusiasts would calmly but earnestly debate the relative merits of say, shaking vs. stirring, while sipping a sazerac. It was, indeed, a cocktail mecca, but I was little off base with "calm". Shortly after it opened, the Anvil was such a scene that even earlier in the week, it was a fight to get to the bar. It was also a little bit of a pick-up bar - the sort of place where a random dude and his friends would approach you and your friends, offer to buy you a drink, and ask you if you were going to Pub Fiction after this. No, I am not going to Pub Fiction. I am going home, because it is 11 PM. On a Tuesday.

Things have calmed down a little since then, but you still never know quite what you're going to get. There's still the occasional bunch of toolios who only want to drink absinthe and miller lite, but you're just as likely to run into 40-something businesspeople. (Not that I'm hating on miller lite. It's just that there's a time and a place for miller lite, and this is not the place. Now, absinthe and miller lite together...that could be interesting.)

Weekends are still pretty packed, so if you want to ensure yourself a spot at the bar so you can watch the magic, go early. Like, 7 on a Monday or Tuesday night.

The Drinks: Ohh, the drinks. When I first started plotting to do a post about the Anvil, long, long ago, they had a section of their menu with a list of "100 Classic Cocktails to Try Before You Die". Well, the 100 cocktails are no longer a part of the menu, although you can still see the list, posted in a rather inauspicious location on the far wall of the bar. (It's the wall opposite the door as you come in. Or you can view the list here.) They've been replaced with a rotating seasonal menu of original drinks developed by the Anvil staff, which are all very delicious. The good news is, you can still order all the old cocktails, as long as you know what to ask for. So if you're yearning for a classic, or you just want to feel like an insider for ordering off the menu - here's a list of my Top 5 Classic Cocktails to Order "Off the Menu" at the Anvil.

1. The Bramble
This is the first drink I ever ordered at the Anvil. I finished it in about 45 seconds, and then bad things happened. But I don't blame the drink, I blame me. Okay, I blame the drink a little. This combo of gin, lemon, and creme de muir (blackberry liqueur) is so delicious and smooth that it's easy to forget you're drinking something very powerful.

2. The Seelbach
Kassie gets credit for discovering this delicious and very unusual cocktail. The first time she ordered one it actually came with a warning from the bartender - there's a lot of bitters in this one. Are you sure that's what you want? Of course, Kassie is never one to back down from a challenge. The Seelbach tastes like no champagne cocktail I've ever had - it's a deep, rich, complicated taste that reminds me of a nice complex Napa cabernet. Thanks to the Ted Haigh book, I now know that this is because the recipe for a Seelbach involves: champagne, bourbon, cointreau, and seven dashes each of both peychaud's and angostura bitters. For those playing along at home: that is a whole, whole lot of bitters. Yet somehow it works.

3. The Mint Julep
On the seventh day, God rested, and on the 8th day he invented the mint julep. People sometimes ask me what my favorite cocktail is, and this is always my answer. The combination of bourbon, sugar, and mint is stupidly simple and stupidly good. And the mint juleps at the Anvil are a real feat of artistry - piled high with crushed ice like a bourbon sno-cone. I mean - I just said "bourbon sno-cone". What more could you want?

4. The Blood and Sand
This cocktail, named for a 1922 Rudolph Valentino film, is a relative rarity: a mixed drink made with scotch. The combination of scotch, sweet vermouth, oj and cherry brandy might seem a little unusual, but you will only think that until you take your first sip. It's perfectly balanced, not too fruity, not too scotch-y. (Although it's difficult to imagine how something could taste too much like scotch.) 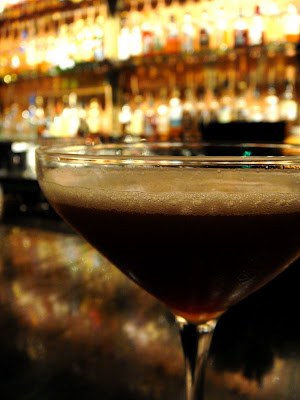 the Blood & Sand.
5. The Zombie
Probably the most famous cocktail invented by Don the Beachcomber during the post World-War II tiki explosion. (I especially enjoy the phrase "tiki explosion".) There are a lot of bad zombie variations out there, but the Anvil has got it right. (And if the original version is a little too sweet for you, I've heard you can get one made with Fernet Branca. Iiiinteresting.) At least half the fun of ordering any drink at the Anvil is watching all the artistry that goes into making it, and this one is especially enjoyable, since this delicious, rummy bit of cocktail history contains about 52 different ingredients. Of course, since so much work goes into making this drink, if you order one on a busy night your bartender will probably hate you. Save this one for a weeknight. And don't forget to leave a nice big tip.
Posted by Nancy at 5:13 PM
Email ThisBlogThis!Share to TwitterShare to FacebookShare to Pinterest