As promised...even more vodka infusions! Check out part 1 if you haven't already.

This time, I made one of the Martha infusions and tried a bunch of my own. All the infusions in this post are made with 1.5 cups of (Texas!) vodka and infused in a cool, dark place in an air-tight jar for two days, shaking occasionally. After the infusing period, strain out everything but the vodka and store in the freezer for up to 2 months. 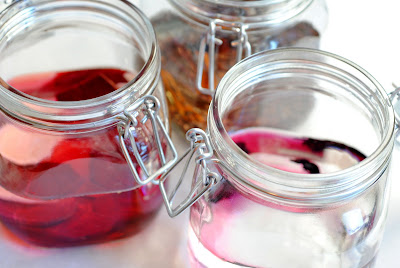 This one came from Martha Stewart Living. Sounds savory and intriguing, right? Not so much. I thought this was totally gross. It also, somehow, reminded me of peanut butter. Sorry, but I don't want my booze to taste like borscht. Or a pbj.

This infusion turned bright pink, almost mauve, so I was worried that the hibiscus flavor would be too powerful. I was wrong. The vanilla is quite strong. Only vaguely floral. Verdict: try again, with lots more hibiscus. 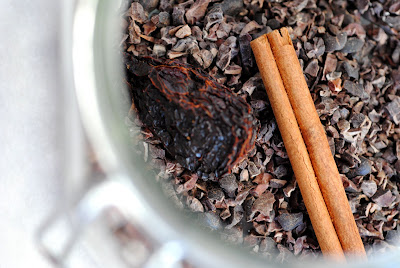 *Cocoa nibs are chocolate in its rawest form, straight from the cocoa bean. They look a little like tiny chocolate chips, and taste very intense and a little bit bitter. It's a deep, dark, mysterious flavor that, it turns out, works great in vodka.

The cocoa is yummy, and rather intense, but that's how I like it. I taste the chipotle, but the cinnamon is MIA. I'm gonna cheat this one by straining out all the other ingredients and then adding an extra cinnamon stick to the vodka and infusing for another couple of days. Then I might need a second opinion. Volunteers?

Seriously delicious. Still vanilla/woody, but this time in a good way. No longer tastes like a candle. I still want to do one more tweak - I'm going to try this one more time with a little bit less cinnamon. 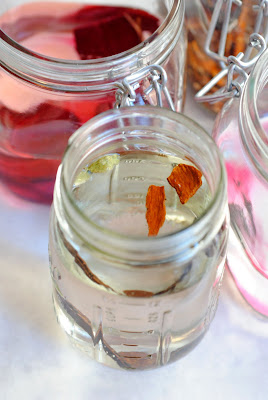 Next up: hibiscus vodka reloaded, the verdict on the chocolate/cinnamon mix, and a final go at vanilla/cardamom. Until then!
Posted by Nancy at 12:29 PM
Email ThisBlogThis!Share to TwitterShare to FacebookShare to Pinterest