I have created the drink that will boost me to greatness.

To which you say: "Surely you are exaggerating."
To which I say: "You gotta try this."

My flavor inspiration: I have a little weber grill. It is blue and I love it, and sometimes people come over on Sunday nights and everyone brings things for the grill. Once Cyndy brought peaches, and after all the burgers were finished grilling she put the peaches on the grill, each with a scoop of brown sugar in the pit. Half an hour later, they were one of the most amazing things I've ever tasted.

Anything you can eat you can drink, right? I had to give this a try. The peaches and brown sugar were obvious. I added a little lemon juice to the mix, to balance out all that sweetness. What to do for a base? How about rum? A nice aged rum, to impart a little smoky/woody flavor, like being cooked over the grill. After I had already made the first version of this cocktail, a thought popped into my head: hey, what about that peach bitters I bought a while back? I added in the bitters. It was brilliant. It was like the discovery of vulcanized rubber: accidental genius. 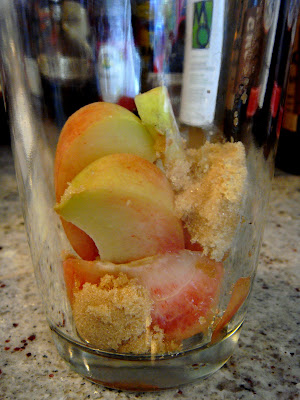 This is an okay time to start salivating.

You will need:
5 slices of delicous, fresh Texas peach (peach season is almost over in Houston (didn't it just start?), but if you hurry you can still get some at the farmers market.)
1 tablespoon of brown sugar
2 oz aged rum (I used Flor de Caña gold. Turns out there is light aged rum, and gold aged rum - and maybe dark aged rum? I used to think there was just rum.)
.5 oz lemon juice (love your cocktail, make it fresh)
2 dashes Fee Brothers' Peach Bitters
Muddle the peaches and brown sugar together in the mixing glass of your shaker until you have a delicious sugary peach mush. Fill the glass with ice and add the rum, lemon juice and bitters. Shake until it hurts. Strain into a cocktail glass. (Rimmed with brown sugar, if you're feeling fancy.) Enjoy the hell out of it. 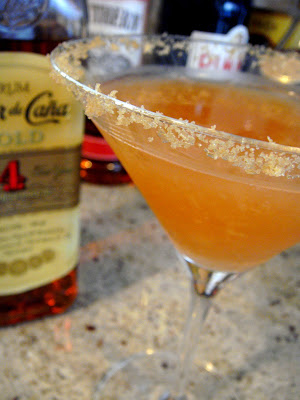 Posted by Nancy at 5:22 PM
Email ThisBlogThis!Share to TwitterShare to FacebookShare to Pinterest