Named for the street Scarlett O'Hara lives on in Atlanta. I might be just a little obsessed with Gone with the Wind. (Thanks Paul for the idea.)

Inspired by the bounty of delicious peaches I got at the farmers market, I decided to try more peach drinks. There's one, the Peach Donkey (I'm guessing it's called a donkey because of the habit of calling mixed drinks with vodka and ginger ale a "mule") from this book that I'd been wanting to try. The original recipe calls for peaches, vodka, ginger liqueur, and ginger beer. Ginger beer, it turns out, is like ginger ale, but with a stronger ginger flavor, and a lot harder to find. I finally hunted down some ginger beer (thank you, Central Market), mixed up the drink, and tried it. Instead of love at first sip, my feeling was one of a resounding....eh. I was bored. It needed something else. Something like...mint. 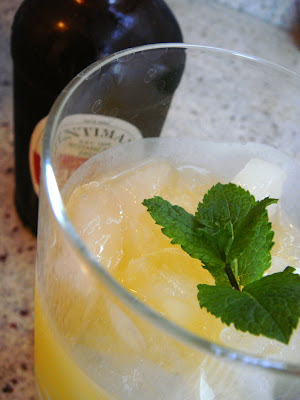 So here you go:
One ripe, juicy peach, pitted and sliced*
6 mint leaves (fortunately the mint in my garden is undergoing a sort of explosion, so I did not need to look far for this)
1.5 oz vodka
1 oz chilled ginger beer (ginger ale will do in a pinch, but you'll need to use a little bit more.)
crushed ice

*How do you spot a ripe peach? A ripe peach may have red and orange shadings on its skin, but underneath the other colors it will be a bright yellow. Ripe peaches also have a stronger peachy smell than not-so-ripe peaches. If the peach is so juicy it falls apart as you're trying to slice it that's a good sign.

Muddle the peaches and mint together in the mixing glass of a shaker. (You may want to try muddling half the peach first, and then adding the other half. A muddler will work, but a large spoon comes in handy when trying to extract as much juice as possible from the peach.) Add 5-6 ice cubes to the shaker and add the vodka. Shake it all up and strain into a collins glass. Fill the glass about 2/3 of the way with the crushed ice, and then add the ginger beer. Pop in a straw, give it a little stir, and you're done. Yum.
Posted by Nancy at 12:04 AM
Email ThisBlogThis!Share to TwitterShare to FacebookShare to Pinterest