My goal: to create a cocktail inspired by my love of the Southwest. 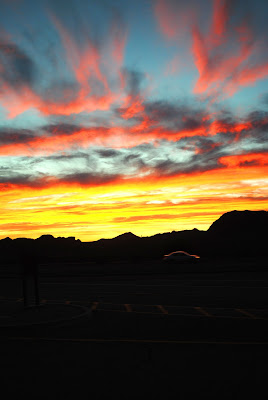 This sunset really happened.
My inspiration: the pretty light pink Prickly Pear margarita I had at the Arizona Room, on the edge of the Grand Canyon. A little sweet for my taste...but I could work with this. Here was my idea: a margarita with prickly pear and jalapeno (a la the award-winning cocktail Jason had at the Copa d'Oro). What could be more southwest than that? 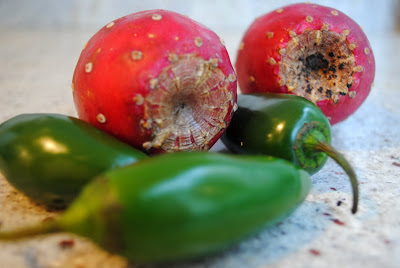 Turns out prickly pears aren't so easy to find, at least in Houston. I started out making my Prickly Pear margarita with a monin prickly pear syrup, but the syrup was black, which made for a not so appealing drink. So I finally hunted down some prickly pear fruits ("nopales" in Spanish) at (where else?) Whole Foods.

So, as I get in line, so excited to have found the very last two cactus pears at Whole Foods, the cashier gives me a look of abject terror. Terror, and pity. "Have you been carrying those with your hands?", he asks me, as I place the prickly pears on the belt, clearly with my hands. "Because they'll cut ya." I look at my (uncut) hands while the cashier bags my prickly pears ever so gingerly, as if they had ebola. This is a very confusing conversation.

But it was all explained to me later by the Internet, Explainer of Many Things. Turns out that when you pick a prickly pear from an actual cactus, it's covered with little tiny spines that will lodge into your hands and make them feel like they're on fire. The cactus pears they sell at most grocery stores have been de-spined, but apparently my cashier was unaware of this. I think this is wonderful, because it means that my Southwest Margarita is made from something that is both beautiful and dangerous, just like the Grand Canyon itself. 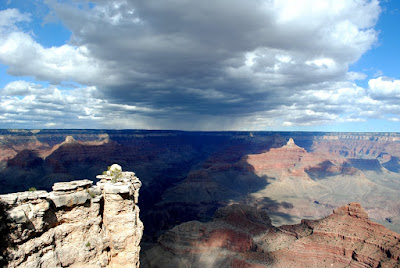 I love the Grand Canyon so much.

So how does one juice a prickly pear? I'm glad you asked. It goes like this:
1. Cut off the ends of the prickly pear.
2. Make a long cut, about half an inch deep, lengthwise down the pear.
3. Starting at the cut, unwrap the thick outer skin of the pear, revealing the seedy flesh below. 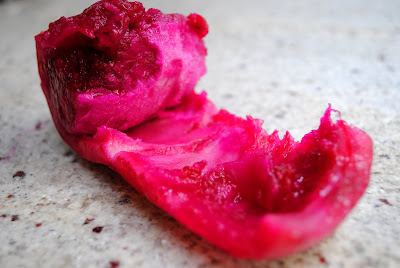 Sarah Burkhart: do not look at this picture.
Yeah, I was a little creeped out writing the words "seedy flesh", but that's what a prickly pear looks like - very similar to a pomegranate. And the taste? It starts out a little bit vegetal and finishes very sweet, almost like bubble gum. The riper the pear, the more pronounced the sweetness will be. (You can tell the fruit is ripe because the skin will be a dark magenta.) I struggled for a long time to place the vegetal smell of the prickly pear until I realized what it reminded me of: snapping green beans at my grandma's house. I know, you're kinda grossed out. Green beans and bubble gum? Sounds weird, but...it works. And it works especially well with tequila.

But first: how do you turn all that seedy flesh (sorry!) into something you can put into a drink? Chop the flesh up into little bits (about 1/4" square), throw them into a blender, and run the blender until the flesh is liquefied. Then, strain out the seeds using the strainer-and-a-spatula method found in this post. This is especially satisfying because the end product, the prickly pear juice, is bright, crazy, magenta, Barbie pink. It might be my new favorite thing. 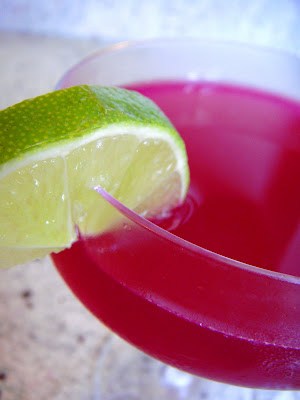 Just enough prickly pear flavor to keep things interesting. Prickly pears come from a cactus, tequila comes from a cactus...they're practically cousins, so it's no surprise that they play well together. But my southwest margarita needed something to make it even more beautiful and interesting and dangerous, so I added...jalapeno.

Muddle three slices of jalapeno (minus the seeds) in a pint glass. Add all the other ingredients, fill the glass with ice, and shake for at least 3o seconds. Strain into a glass full of crushed ice. Garnish with extra bits of jalapeno and add a little crushed ice and a slice of lime on top. 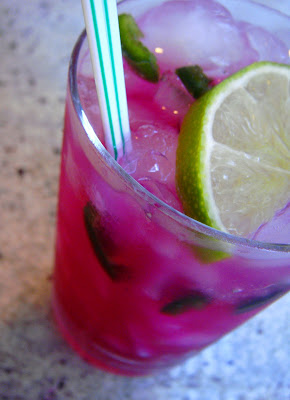 My favorite thing about this margarita is how damn pretty it is. I was pretty much obsessed with taking pictures of it. It doesn't taste bad, either - just like the nopalito, but with a little extra kick.

Also: lesson learned: never, ever, ever, garnish the rim of a glass with a jalapeno. It will set your mouth on fire. This may or may not have happened to me. I may or may not have stood around the kitchen, dabbing my flaming lips with a paper towel soaked in milk, while Betty (my taste tester for the occasion - thanks Betty!) laughed at me. 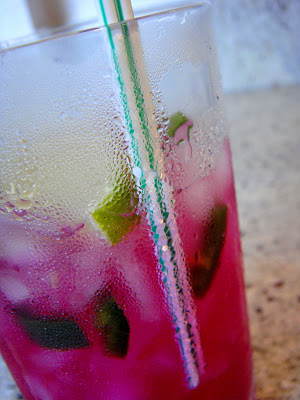 Posted by Nancy at 2:51 PM
Email ThisBlogThis!Share to TwitterShare to FacebookShare to Pinterest