From the bizarre catalog of forgotten liqueurs now being lovingly embraced by elite mixologists the world over comes...Pimento Dram. That's right. Pimento. 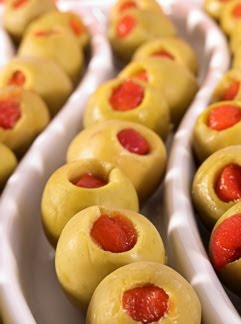 ?
When most people think of pimentos, they think of those little red things stuffed into olives. I think of pimento cheese, which as a child was pretty much my favorite thing ever. If I could've eaten it for every meal, I would have. Neither of these sounds particularly like something you would want in your booze. (Although I made a surprisingly tasty drink with balsamic vinegar...so I'm not completely ruling it out.)

The pimento of Pimento Dram is the dried, unripe fruit of the pimento tree, native to the Carribean and Central America. The natives called it "pimiento" in Spanish, later Anglicized to "pimento", but the English christened it "allspice", because to them it combined the flavors of cinnamon, nutmeg, and cloves. The natives made a liquor from it by soaking the berries in rum, and the English took to this, because they've always been good at stealing other people's ideas. By the 1930s, that glorious post-prohibition cocktail explosion, Pimento Dram could be found all over Europe and the United States, and became a big hit in classic cocktails and Tiki drinks.

The 1980s was a dark era for mixology, when people stopped caring about the craft of cocktails and became far more interested in drinking copious amounts of vodka and getting sloshed. (I blame advertizing. And hey - it was the eighties. A lot of supremely cheesetastic music came out of this era, but nobody claimed it was a bastion of good taste.) Pimento Dram generally fell by the wayside and was no longer available, except in Jamaica.

With the recent resurgence of interest in classic cocktails happening in the States lately, somebody decided it was high time Pimento Dram made its comeback. But there was one problem...the name. In much the same way "rapeseed oil" became "canola oil", Pimento Dram became Allspice Dram. Just as no one could cook their vegetables in something starting in "rape" and feel even remotely comfortable, nobody could say the words "Pimento Dram" and conjure up anything even remotely worth drinking. 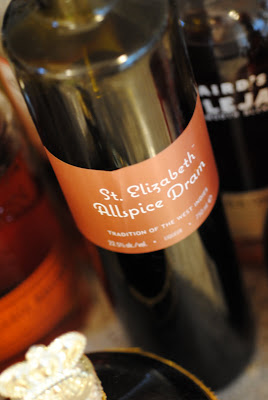 So Pimento Dram was re-christened Allspice Dram, and it is now available at your local liquor store, or at least at the downtown Spec's, that wonderful mecca of liquor and obscure foodstuffs. ("Foodstuffs" - now there's a word that doesn't get used nearly often enough.) I acquired a bottle, which turned out to be a good investment because I find its gingerbread-y smell to be completely intoxicating and want to put it in pretty much every drink I make. It is the wintertime equivalent of St. Germain.

Smell: Yum yum yum. A bit peppery, but mostly...smells like gingerbread. Yum.
Taste: I don't think anybody, even the producers, is advocating taking Allspice Dram straight, but I did, because I take my job as your guide to the wilds of booze very seriously and I want to bring you the best and most complete information possible. So the taste: starts out sweet, gets VERY peppery, finishes like it smells: all gingerbready and awesome. I feel compelled to point out, having already made several drinks with allspice dram at the time of the writing of this blog, that the peppery taste never comes out when you mix this stuff in cocktails - only the gingerbreadiness. Wonder why that is?

Finally, for your drinking pleasure, I present the Lion's Tail, a classic cocktail made with Allspice (aka Pimento) Dram. With many thanks to Ted Haigh and his excellent book, Vintage Spirits and Forgotten Cocktails. 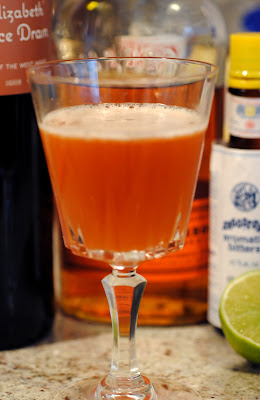 Combine all ingredients in a mixing glass. Fill with ice. Shake and strain into a cocktail glass.

Verdict: I like this. I really, really like this. I think my love of bourbon has been well established in this blog - and considering that Allspice Dram tastes like gingerbread, the Lion's Tail is basically a sweet, boozy marriage of two of the things I love the most. Mmm. 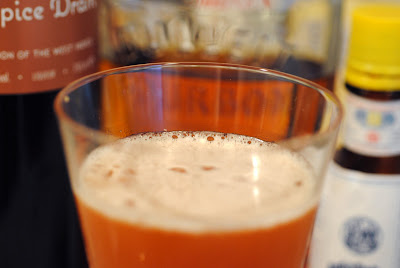 P.S. For another great idea of what to do with Allspice Dram, check out this post from the Tipsy Texan. Recipe by Tito's vodka, video by David Alan, whom I had the pleasure of meeting last Tuesday at a cocktailing contest in Austin - the details of which you will find in my very next post. Stay tuned.
Posted by Nancy at 8:07 PM
Email ThisBlogThis!Share to TwitterShare to FacebookShare to Pinterest