Is it mixology Monday again? How the hell did that happen? Seems like just yesterday I was boozing it up with the ghost of Ernest Hemingway. This month's theme, with your host Chris Amirault over at eGullet, is "Like That? You'll Love This!" The goal, as described here, is to introduce cocktail novices to fancy drinkin by using a "gateway" cocktail that's a schmancy twist on a drink they already know and love. I thought this would be the perfect opportunity to take a second look at one of the cocktails most reviled by serious mixologists: the Long Island Iced Tea. 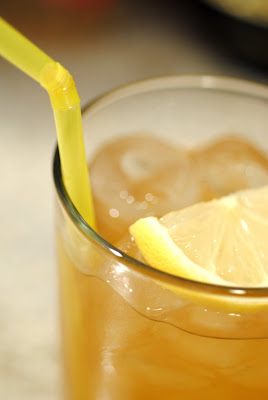 Why is it that the cocktailing elite disdain the Long Island Iced Tea? Here, as I see it, are two reasons:

1. Most Long Island Iced Teas that you order at bars are unbearably sweet.
2. A Long Island Iced Tea (as you will see if you look at the recipes below) contains a great deal of booze. Yet somehow, it tastes delicious. Generally, the sort of people who order Long Island Iced Teas are those who don't like the taste of alcohol, but want to get drunk very quickly. This is abhorrent to the mixology elite, because A. they see booze as its own end, rather than a means to an end, which is: drunkenness, and B. they love the taste of alcohol (see "A") and don't understand why anyone would want to drink booze that doesn't taste like booze.

In my mind, the LIT deserves a little bit of respect. ("LIT" is Will's acronym for this particular drink, since saying "Long Island Iced Tea" over and over again is a bit clunky. Technically, it should be LIIT, but that's even clunkier. Also, Will's acronym accurately describes what you will be if you consume just one of these.) You may not like the kind of people who drink it, but you have to concede that what it does, it does remarkably well. In fact - I would go so far as to say that the LIT is magic. Making a glass full of hard liquor taste like something you'd get at Sonic is nothing less than a feat. And there's nothing like a pitcher of LITs to bring the party.

The Long Island Iced Tea
1 oz vodka
1 oz gin
1 oz rum
1 oz tequila
1 oz cointreau (Or triple sec. but really...cointreau makes everything better. It's so expensive, it damn well ought to.)
1.25 oz fresh-squeezed lemon juice (did you hear the part where I said fresh squeezed?)
1 oz simple syrup
.5 oz coca-cola
Build over ice in a pint glass. Stir before serving. I go a little easy on the vodka and gin - more like 7/8 oz.

One night while hanging out at Revolution (a neat little coffee shop/bar in Bryan) with Alan and Jen, I overheard the bartender describing her particular variation on a Long Island Iced Tea. She called it New York Mother (word I decline to print here, based on the slim possibility my mother will ever read this blog). It's just like a Long Island Iced Tea, only substitute whiskey and amaretto for the tequila and rum. I couldn't wait to get home and try this. I did, and the result? Huge success. My friends loved it. I've honestly never made a plain old Long Island Iced Tea ever again. You get the same what-is-it taste like with a traditional LIT, with a little bit of that warm, sweet brown-liquor flavor from the whiskey and amaretto. (And I sure do love me some whiskey.) 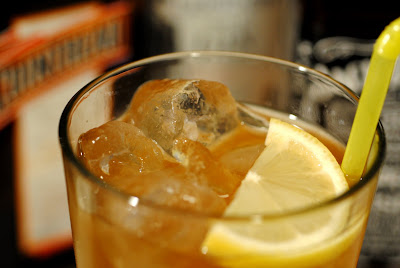 The appeal of the Staten Island Ferry, of course, is that, like its predecessor, it packs a great deal of booze into a surprisingly palatable drink. This makes a great pitcher drink at a certain kind of party...just increase all the measurements to cups (1 oz = 1 cup and so forth), and add a handful of ice to the pitcher and stir to mellow out all the alcohol. Floating slices of lemon add a particularly nice touch, and will make your pitcher look particularly innocuous and Martha Stewart-y. (I mean - would Martha Stewart ever get you drunk? (Actually, I don't know how to answer this question, since Martha Stewart is a very multi-faceted person. But if Martha Stewart is drunk...well, I want to be there for that show.))

But you know me. A good drink, like a good work of art, is never truly done. Lately I have completely fallen in love with St Elizabeth's Allspice Dram. It is like the St. Germain of winter - I want to put that shit in everything. And since we already knew that Allspice Dram complements warm, bourbon-y flavors...why not try it in a Long Island? Or rather, in a Staten Island.

I am a cocktail freaking innovator. A cocktail Christopher Columbus. And Magellan. All rolled into one. 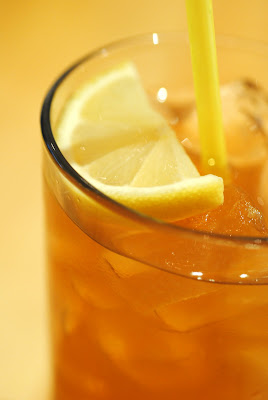 For those of you playing along at home, those are the same ingredients from the Staten Island - just add the Allspice Dram.

You guys - this is good. It's got the magic LIT taste, plus whiskey warmth, plus a little bit of spicy allspice dram goodness. I don't know if the Long Island Iced Tea will ever be truly acceptable to the cocktailing elite, but here's a drink that is a step in the right direction.
Posted by Nancy at 11:54 PM
Email ThisBlogThis!Share to TwitterShare to FacebookShare to Pinterest