There isn't really a story behind this cocktail. Okay, there's a story. There's always a story. Here's the story, presented in helpful bullet points:
1. I used to be an architect.
2. The people who paid me to be an architect stopped paying me, so I stopped being an architect.
3. Being unemployed means having lots of time to a. mix delicious drinks, and b. cruise the internet aimlessly.
4. While doing b., I stumbled across a blog called The Tipsy Texan. On said blog was a notice about a cocktail contest. All I had to do was create a cocktail with a spirit distilled in Texas. I could do this.
5. While perusing the list of acceptable spirits, I noticed something called Balcones Rumble. Um...wtf is Balcones Rumble? I was curious. I asked the internet. 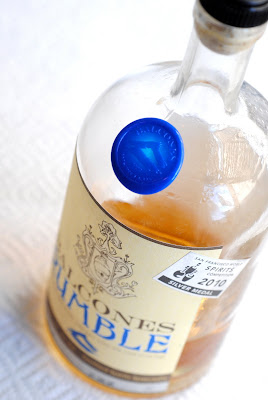 The internet had many, many answers. According to the Balcones Distillery's website, Balcones Rumble is distilled from a dessert sauce made with turbinado sugar, honey, and figs. But what does it taste like? Some people said: this is stuff is so sweet! It's like a liqueur! I drink it straight (even though it is 94 proof)! Others said: tastes like rum! Still others said: tastes like tequila!

None of this really answered my question. Balcones Rumble, apparently, is a spirit that defies classification. It is the Pirate Coast of distilled spirits. (Only Rachel got that joke. And maybe Scott and Hannah.) I was fascinated. I knew somehow that the destiny of this chimera of a spirit was linked to mine.

I went to my trusty downtown Spec's, where I discovered the renegade Balcones Rumble hanging out on the bourbon aisle. (Which only added to the confusion.)

6. I tried the Balcones Rumble. It smelled myteriously sweet and intoxicating, like all the things you love about booze all rolled into one liquid. It tasted...like burning.

No, there was a little burn on the beginning, reminiscent of Whiskey (hey, this stuff is almost 50 percent alcohol, after all), and a wonderful sweet finish. If any bars at all carried this stuff, I would never shoot anything else, ever again. But could I make a cocktail with it?

7. There was this unopened bottle of Allspice Dram on my countertop, begging for a purpose. Hrmm. Allspice Dram is good with bourbon, and Balcones Rumble tastes like whiskey, which is like bourbon...it was kind of a stretch. But I am nothing if not adventurous.
8. Tried Balcones + allspice + pear. Because pear goes good with spices. I know this because I have a recipe for a pear and spice-infused rum that I will soon post that will blow your mind. But despite all this...I was unconvinced.
9. I also had a bottle of Berentzen's Apfelkorn on my counter. Dale Degroff promised me it would make an awesome apple old-fashioned, but Dale Degroff lied, so I had this damn bottle of Berentzen's just hanging around, taunting me with its uselessness. Apples play well with spices, too, so into the drink it went. And it was good.
10. After I tried about 42 different variations to get the proportions just right. Soon my liver will be as strong as Ernest Hemmingway's. 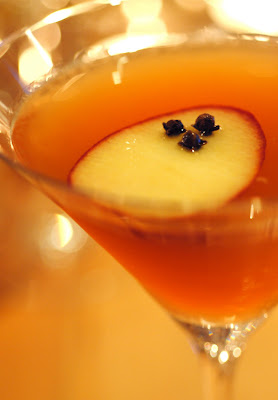 Combine all ingredients in a shaker full of ice. Shake and strain into a cocktail glass. Garnish with a slice of apple studded with a few whole cloves.

***I wanted to call this drink "The Midnight Rumble, because I feel like people always remember drinks with racy names. But something called "midnight" should be black, and this wasn't even close.
****The contest version of this drink was actually made with 1/2 oz honey syrup (made from Texas wildflower honey, in keeping with that whole local ingredients thing we have going on here), but at the event in Austin, one of the Tipsy Texans, Joe, suggested that simple syrup might help mellow out the burn of the Rumble a little better. I tried it again at home with turbinado simple syrup, because I figured it would compliment the Rumble well. And oh, it did. Thanks, Joe.

12. I submitted my cocktail recipe to the contest.
13. I waited.
14. I got an email. I won!!!!! Okay, I didn't win, exactly. I was selected as one of five finalists. But still...I was pretty stoked. (I never win anything. Not even like, coloring contests in kindergarten. So this was pretty, pretty exciting.)
15. Because I was selected as a finalist, I got to go to Austin for the Big Event - Edible Austin's Drink Local Night. I had to make six cocktails, in seven minutes, for a panel of five judges, in front of a huge crowd of people. While talking (extemporaneously, because I didn't know there would be talking involved) about how great my drink was. Needless to say, this made me a little nervous, but I think I pulled it off okay.

At this point I was going to include a cute photo of me bartending (or making a valiant effort at bartending), but I kept checking the photographer's blog and he kept not putting up the photos. I was starting to get really annoyed when I realized that this was because he and his wife just had a baby. Then I felt like a huge asshole.

So...sorry. No photo. Instead, here is a photo of Sarah sampling my cocktail. She liked it a lot. 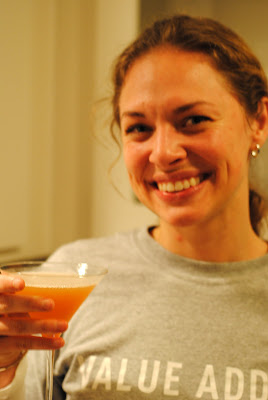 Edited to add: Jenna helpfully linked me to some photos from the event on Edible Austin's Facebook page. So, here I am! Check me out: 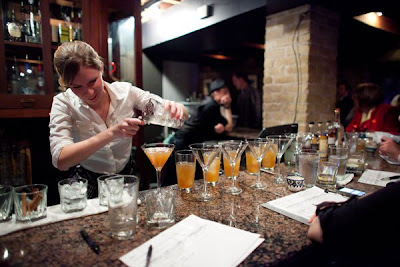 photo by Dustin Meyer.
16. I didn't win. But I did meet a lot of great people, and a lot of fellow mixology fiends, including a guy who was part of Team USA in the World Cup of Cocktails. (There's a World Cup of Cocktails??) These people are really, really hardcore, y'all. One of my competitors couldn't find the perfect butter for his hot buttered rum drink, so he got some cream from a local dairy and made his own. That's okay because next year I'm just gonna buy my own cow. Watch out.

I also had a shot called the Pickelback, which is - a shot of bacon-infused bourbon (bacon-infused bourbon!! who knew that stuff would crop up again?), followed by a shot of pickle juice (yeah, for reals), followed by a chaser of beer. What did it taste like? It was an interesting, savory experience, almost like eating food. Liquid food, that gets you drunk really quickly. Also, I think my taste buds just about had a seizure. Too...much...sensory...input...

17. So it was a pretty fun night. Fun, and educational. Apparently I'm just dipping my toes into the cocktail pool. (Mmm, cocktail pool.) There's a lot out there.

I hope you enjoyed reading this story almost as much as I enjoyed living it. If not...come by, and let me make it up to you with a drink. 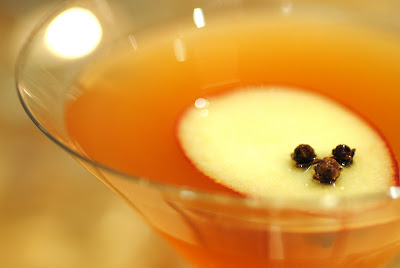 **And by "fortune" I mean a gift bag with some chocolates and two airplane-sized bottles of liquor.
*Okay, not fame either. Working on that.
Posted by Nancy at 4:02 PM
Email ThisBlogThis!Share to TwitterShare to FacebookShare to Pinterest