So when I cooked up (cooked up - see what I did there?) the idea for this month's Mixology Monday, Houston was in the grips of something curiously akin to winter. For a couple of weeks, the temperature dipped below forty degrees, and I laid low and drank hot buttered beer and dreamed of sangria.

Winter didn't last long, however, and now that Mixology Monday has come around it's a sunny 75 degrees, the blueberries are in bloom, and I'm thinking about planting tomatoes. Normally I love Houston's bizarre, balmy weather, but I have to say that today I'm a little jealous of those of you in the frozen north. What better pick-me-up on a cold day than one of these delicious hot drinks? I might even make one to enjoy by the pool. 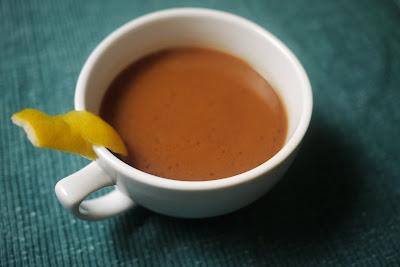 For Elana over at Stir and Strain, hot alcoholic drinks conjure up memories of dad giving her hot whiskey for childhood illnesses. Love it. Her Hot Buttered Warm-Up is made with a cardamom, vanilla, and muscovado sugar butter (I started drooling when I read that) melted into black tea with bourbon, lemon juice, and amaretto. An unusual flavor combo, and one that I am dying to try. 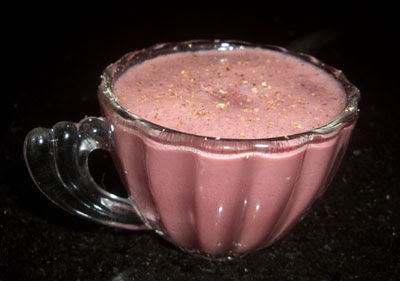 Frederic of cocktail virgin slut reaches waaay back to a cocktail book from 1867 to bring us the Locomotive. As he says, "since these early railway vehicles used heat to generate steam to propel them, having a hot drink named after them was not very surprising". The recipe, though, is pretty surprising, at least to us moderns - it's wine, sweetened with honey and orange liqueur, and thickened with egg yolk. Given my affinity for bizarre combinations and old recipes, I'm happy to hear this one was a hit.

Jordan, from Chemistry of the Cocktail, makes a hot chocolate cocktail with dark chocolate and a chocolate and spice-infused rum. I'm just starting to experiment with spicy/chocolate combinations myself, and I have to say...this sounds amazing. 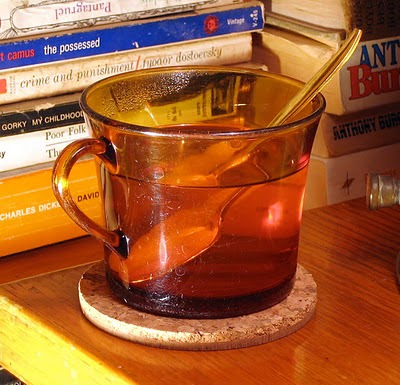 Rowen over at the Fogged in Lounge tries out the somewhat salaciously-titled Vanilla Whiskey Skin. It's a toddy made with rye, vanilla syrup, and lemon peel. Yum. Vanilla in a toddy...that opens up a whole new realm of possibilities. Also, I like your backdrop of classic novels. 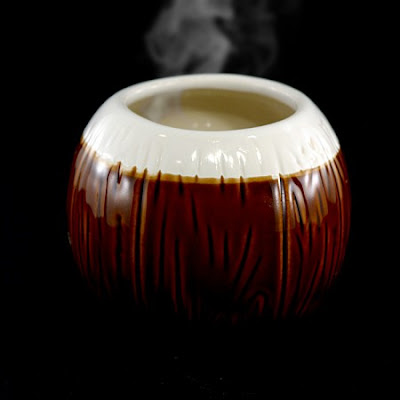 Doug of the Pegu Blog offers up a Hot Buttered Mai Tai. The first time I opened this link, my response was something like...whaaat? The Mai Tai was one of the first drinks I ever made, and it's still one of my favorites. But hot? And with butter? Then I remembered that I had a similar response to the hot buttered beer, which turned out to be delicious. Thankfully Doug gives us detailed directions for making the most of this "cosmic convergence". 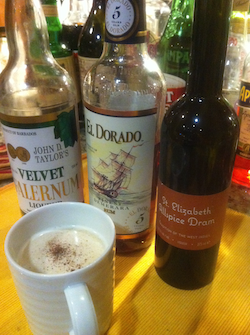 Speaking of hot tiki drinks...Layne over at the Ace Saloon brings us the Heaven's on Fire, inspired by a Don the Beachcomber recipe from 1937. And the ingredients do sound heavenly. Start with butter, honey and coconut...add rum, allspice dram, velvet falernum, and milk. Drool. (P.S. Layne says that he loves mulled wine, but his friends are sort of meh about it. You should meet my friends. They drink mulled wine like it's going out of style.) 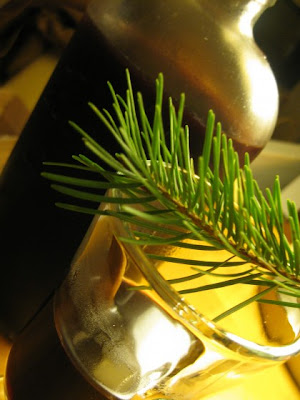 Dave of the Barman Cometh makes some Glogg, the traditional Scandinavian mulled wine, to ward off an unexpected chill in San Francisco. (Because if anybody knows how to make a warming drink, it's the Scandinavians.) I've made lots of mulled wine but never glogg, and I'm dying to try it after seeing this recipe. Did I mention that it calls for lighting a Brandy syrup on fire? That is all kinds of awesome. And is that a christmas-tree garnish? 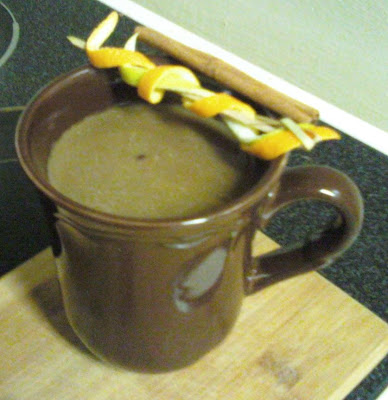 And while we're setting things on fire, there's DJ Hawaiian Shirt's Flaming Coffee Grog. So many things about this drink blow my mind - it's a tiki drink with coffee, for one. And then there's the part where you make a mixture of rum, orange liqueur, citrus peels, and cloves and set it on FIRE. You're supposed to spoon the flaming mixture into the coffee, "where presumably the flames will soon extinguish". So, so great. 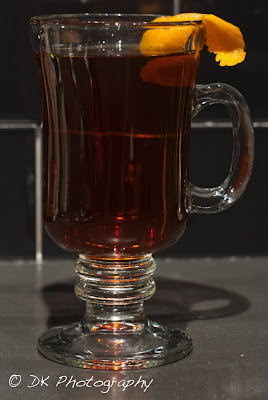 Then we have Dennis, from A Drink on the Rocks. His contribution, the Pirate's Gold, is also tiki-esque, but with...a beer syrup? And chocolate bitters? How strange. How wonderful. Make me one, please. 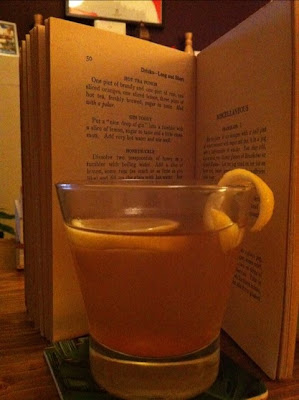 Fearghas lives in Scotland and has tasted the Pimms #3, two reasons I am terribly jealous of him. He and his buddies have a whole blog about gin, and this is their very first MxMo. Welcome to the party! His contribution is, appropriately, a Hot Gin Toddy. 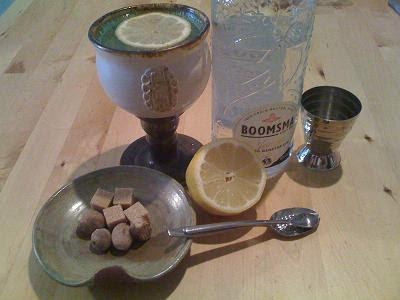 More hot gin! (It's not too often you get to say that.) Marc of A Drinkers Peace, faced with a winter snowfall and unfortunate case of the sniffles, turns to an 1888 recipe for a hot gin sling. Genever, sugar, fresh ground nutmeg, and lemon are warming and soothing. 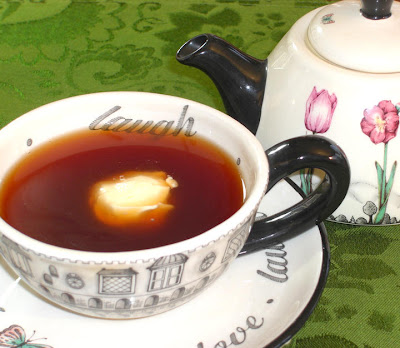 Elizabeth over at Mix n' Sip is another first-timer. Welcome Elizabeth! She offers up her Devonshire Clotted Cream Tea Cocktail, an alcoholic twist on the traditional English afternoon drink, along with some fascinating history of the tradition of teatime. 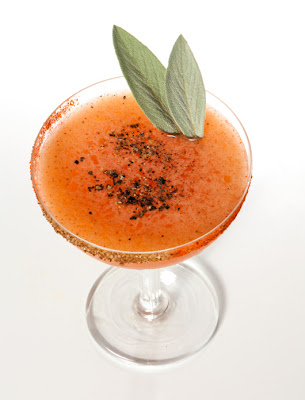 Tony Harion and the Mixing Bar team came to this little party all the way from Brazil. Being that it's 95 degrees in Brazil right now, the team bends the rules a little and makes a hot drink, served cold. Their submission is the Maria Carioca, which is...a spicy tomato drink made with passion fruit. That's right - passion fruit. I am in awe. Also I need to be drinking one of these like, right now. 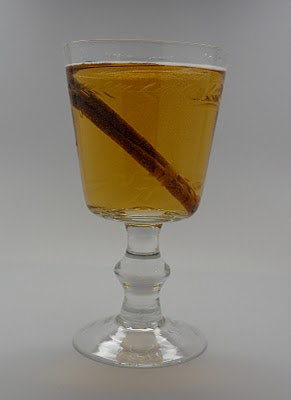 Ed of Wordsmithing Pantagruel makes a Caramel Apple Toddy with applejack, Bénédictine, and caramel syrup. Deeelish. He also offers up some links about flash heating ale with a red-hot poker, the legit, old-fashioned way to make hot drinks. I've always wanted to try this, although I'm a little worried that my fireplace isn't all that clean. 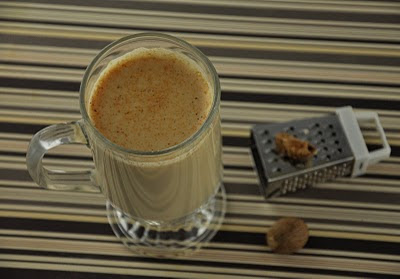 The Alpha Cook offers up the Bull's Milk, a hot drink with an off-putting name but a very appealing photo. Dark rum, cognac, vanilla milk, and maple syrup? I feel warm just thinking about it. 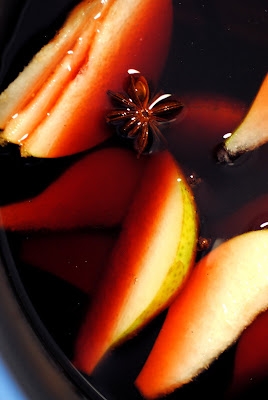 And finally, there's my humble submission...a spiced pear mulled wine. I aimed to make two different kinds of mulled wine, but then decided that the second one would be better off as a sangria. Fortunately, sangria season is about ten months out of the year around here.

Thanks to everyone who participated! Please please let me know if I left out your entry - my inbox is currently a smorgasbord of wild and wonderful hot drinks, and I wouldn't want anyone to have gotten lost in the shuffle.

Thanks also to Paul Clarke, our benevolent founder. See you all next time!
Posted by Nancy at 12:43 PM
Email ThisBlogThis!Share to TwitterShare to FacebookShare to Pinterest