Every year Starchefs.com, the online food gazette, hosts galas in four different cities to honor "rising stars" on the culinary scene. The locations vary; there have been events in New York, Seattle, DC, and San Francisco, to name a few. This year Starchefs finally recognized what you and I have known for a long time: Houston is a really great place to eat and drink. The recipients of Starchefs' very first Houston awards include chefs from some of the most talked-about restaurants in town, as well as Bobby Heugel, the genius behind Houston cocktail institution the Anvil. So when I was offered the opportunity to attend the gala and sample some of this marvelous grub as a guest of Highland Park Scotch Whisky, I was pretty psyched. To say the least.

Let's take a moment to dwell on how fabulous the location was. (It's okay for me to do that. I used to be an architect.) The rooftop pool deck at the four seasons was full of beautiful young people - very Gossip Girl. And there I was. I only regret that I didn't take pictures of the scene. After taking it all in, Lauren and I got down to the real business: eating and drinking. Here are some of the highlights. 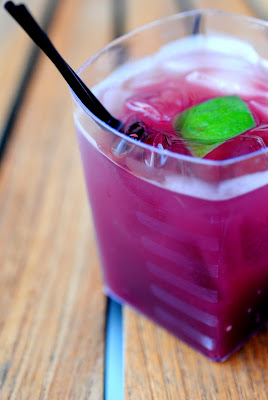 First off: a sangria made with Spanish Rioja, grilled mangos, vanilla bean, and cinnamon. This delicious concoction is the brainchild of Sean Beck, the sommelier from Backstreet Cafe and Hugo's and one of the honorees for the evening. Grilling, he said, brings out new flavors in the mango. And new ideas in my sangria-loving mind. Can a smoky sangria be far away? The food: Oh sweet heavens, the food. I sampled so many wonderful dishes I can't possibly describe them all. Lauren and I both agreed that the sautéed shrimp with white cheddar polenta, from chef Jamie Zelko of Zelko Bistro, was our favorite. A close second: the roasted venison with sweet potato-brussel sprout hash, bacon confit, and pomegranate jus, from David Grossman at Branch Water Tavern. Yeah, just read that over again. It's okay to drool a little. 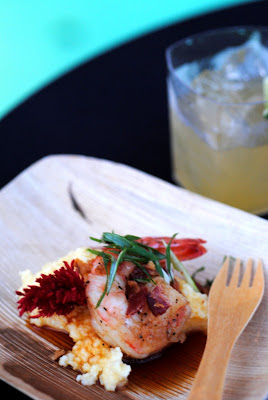 The best damn shrimp and grits you will ever eat.
The cocktails: There were a couple of cocktails being poured for the evening, so of course I had to have one of each. There was the Orkney Opponent, made from lemon, maple syrup, Highland Park's 12-year-old single malt, and allspice dram, and then there was my personal favorite, the Anvil Paloma, made with tequila, lime, and grapefruit beer. (Not quite sure what "grapefruit beer" is but I think I need one right now.) 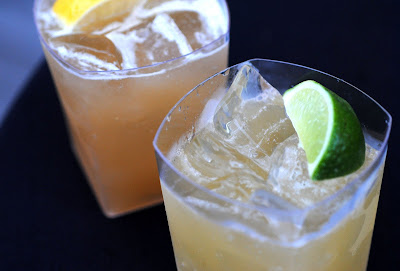 The Orkney Opponent (l) and the Anvil Paloma.
For dessert: Something truly odd. And I liked a cocktail with balsamic vinegar, so for me to say that - it must have been very, very, odd. When you read about a dessert composed of carrot and grapefruit mousse, grapefruit marmalade, candied sesame seeds, hay sherbet, and clove meringue, what stands out to you? If you answered "the hay sorbet", then you win. Look, I consider it a part of my job to be open to trying unusual things. Even after seeing Lauren's face upon taking her first bite, I gamely ate this. I made sure to get a bite with a little bit of everything. And you know what? The flavors really complimented each other. I just couldn't get over the fact that it tasted like cow food.

I'm sure making this was a real culinary feat. I'm really not kidding when I say that it tasted just like hay. You know those buttered popcorn jelly beans? You bite into them, and you're thinking, no way a jelly bean could taste like popcorn. And then they do. They taste exactly like popcorn, and you respect the technology that must've gone into making that happen - but it's still kind of gross. 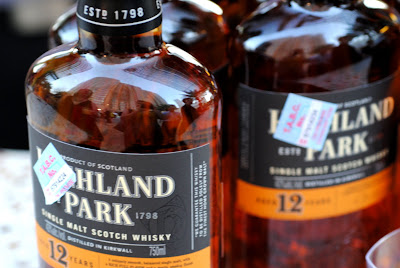 And after that: This post would be incomplete without a mention of Highland Park Scotch, and not just because they were my meal ticket for the event. Their 12, 15, and 18-year-old single malts flowed freely throughout the evening - the 12-year-old was quite good, but the smooth, smoky flavor of the 18-year-old was the high point of my night. And maybe my life. I've always loved scotch, ever since that one time at that one wedding - but I never dreamed it could go down this easy.*

*Highland Park also makes a 30-year single malt, available at Spec's for the modest price of four hundred thirty seven dollars a bottle. I'd like to get my hands on some of that.

Updated to add: click here to see more pictures of the event, including photos of all the featured dishes, and the totally bizarre hay sorbet.

Posted by Nancy at 7:08 PM
Email ThisBlogThis!Share to TwitterShare to FacebookShare to Pinterest