One Thursday afternoon I found myself sipping rum cocktails at the bar at Brenner's on the bayou. I can't believe I didn't know about this place before - it's right in the middle of Houston, a stone's throw from Memorial Park, but when you're sitting on the deck, cocktail in hand, surrounded by trees and by the bayou, you can hardly tell you're in the city at all. "It's just like summer camp, but with booze!", I kept telling Kassie, because I am so much of a city girl that my only reference for a place when you can't see any other buildings is summer camp. (Church camp, actually, where there is definitely not any booze.) So when our bartender, Michael Manahan - the creator of the rum old-fashioned you saw in the previous post - asked us if we would stick around and try a few more of his cocktails, well, I was all over that.

First up: something called the Botany Bay. Michael introduced this by announcing that he was about to make "one of the prettiest cocktails you've ever seen". I was skeptical. I drink a lot. Then I was served this: 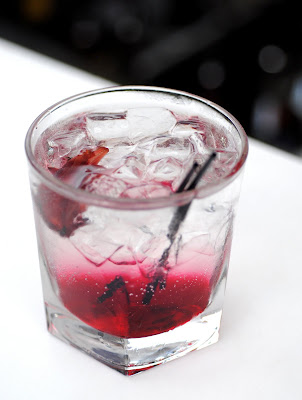 The Bottany Bay - so named for a place in Australia where hibiscus flowers grow - is fairly simple: gin (preferrably Blucoat), elderflower liqueur (I'm assuming St. Germain, since it is the only elderflower liqueur), and hibiscus syrup (which sinks to the bottom of the glass to make this cocktail so, so pretty). It tastes almost as good as it looks, which is to say: it tastes quite good. It's hard to go wrong with gin and St. Germain.

Perhaps encouraged by the success of the very, very pretty gin drink, the bartender next served us a very pink combo of malibu rum, lemon juice, grenadine, and whipped cream vodka. His inspiration? A lemon cream pie. It was a little too sweet for my taste, but if you're in the market for drinks that taste like desserts, this could be just the thing - it really does taste just like pie. Then there's the little difficulty of what to call this drink - Michael told me he didn't have a name for it. So how do you order one, in the event you are craving a glass of boozy dessert? Fishing around for names, I came up with this gem - "Sex on the Bayou". Because 1. people always remember suggestive drink names (buttery nipple, anyone?), 2. it's place-appropriate, and 3. this drink certainly fits into the fruity, girly tradition of the sex on the beach. If you're too embarassed to go up to the bar and order sex (I probably would be, even though it was my idea), just ask for the pink drink that tastes like a lemon cream pie. They'll probably know what you mean.

One more thing you should know about the bar at Brenner's: their glasses are huge. (At least compared to the more moderate pours at the fancy cocktail bars I frequent.) Me, holding my giant glass in hand: "Kassie, this is so much booze." You'll get a lot of bang for your buck. 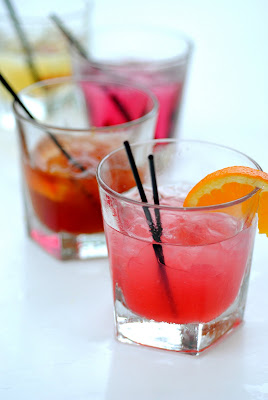 A survey of the damage after an afternoon spent drinking at Brenner's. Thank goodness I brought reinforcements.
Posted by Nancy at 9:51 AM
Email ThisBlogThis!Share to TwitterShare to FacebookShare to Pinterest