Brugal Añejo Rum Old-Fashioned at Brenner's on the Bayou.

A few weeks ago, I got an email from the folks who represent Brugal Añejo rum. There are some cocktails on the menu at Brenner's steakhouse featuring their rum, they said - would I like to try them? Why, yes. Yes I would.

So last Thursday, I headed down to Brenner's, accompanied by loyal drinking buddy Kassie. (Before this I accidentally went to Brennan's, because my reading comprehension skills are slipping. More on that later.) I met the bartender, Michael Manahan, who made me one of his own creations, the Brugal Anejo Rum Old Fashioned.

Now, I'm quite familiar with the concept of an old-fashioned. I've sipped plenty at the Anvil, and made quite a few of my own, including this lavender and elderflower version. But this? This was like nothing I've ever had before. All the nuance you would expect from the interplay of flavors in a bourbon old-fashioned, with a wonderful smoothness. I could drink these all day. 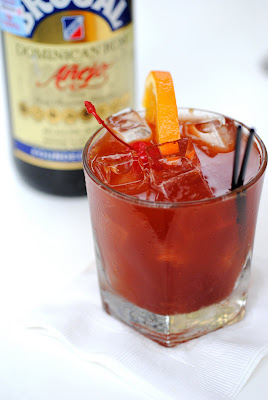 What, I asked Michael, while sipping my way to booze nirvana, inspired him to put rum in an old-fashioned? This is really a very unusual product, he told me - more like a whiskey or a scotch. It's a blend of rums aged between 2-5 years in American oak barrels previously used for Jack Daniels. So of course then I wanted to try the rum straight - maybe I should've done this first? - and he obligingly poured me a little glass. Holy crap. I took a sip and was in love. It was sweet like a rum, but oaky like a nice old scotch. And so, so smooth - no rocks, no nothing. Just super smooth, drinkable rum. (And, at about $18 a bottle, it's a little more accessible than that 18-year-old scotch I was similarly enamored with.)

Want to make some old-fashioneds of your own? Here's how it's done. First, muddle a slice of orange, a cocktail cherry, and a couple dashes of bitters together with 1 tsp of sugar. 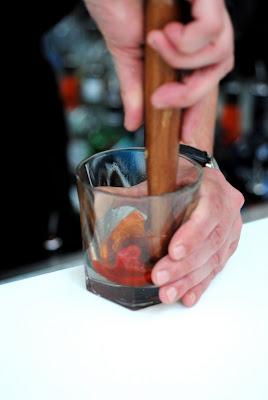 Add ice and 2 oz rum; shake and strain into an ice-filled old-fashioned glass. Top with a splash of soda water. I understand this is a bit different from the usual procedure for an old-fashioned (which doesn't involve shaking) - but it's hard to argue with the results.
Posted by Nancy at 2:41 PM
Email ThisBlogThis!Share to TwitterShare to FacebookShare to Pinterest