After reading this sentence, you probably had one of two reactions:
1. There is a fruit called dragon fruit?
2. There is a such thing as...fruit trends?

Well, yes, and yes. Dragon fruit is so of-the-moment that the New York Times wrote a whole article about how cool it is. And you can hardly blame them - dragon fruit is a really, really cool-looking fruit. On the outside, it's hot pink with wavy green spines. Inside, the flesh is white (or pink, for some varieties) and studded with tiny black seeds. 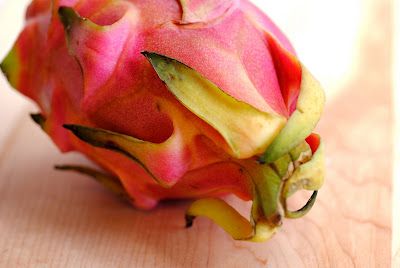 It's got a great backstory, too - the cacti that the fruit grows on only blooms at night, under a full moon. (In the cacti's native lands, the flowers are pollinated by moths and bats; to grow the fruit in America, California farmers have to go out under the light of the moon and pollinate the flowers by hand.) And who wouldn't get excited about a foodstuff with "dragon" in the name?

Unfortunately, I didn't hear about dragon fruit from the New York Times, or some exalted food publication. I heard about it from watching the Bachelorette. (That's right - this is my second drink in less than a month to be inspired by reality television programming. (Here's the first - and a shameless plug for my snarktastic Bachelorette blog.) In a recent episode, Ashley and one of her would-be paramours are seen sitting on a beach in Thailand, drinking champagne and eating dragon fruit. My curiosity was piqued. So when I ran across some dragon fruit at a local Asian market, I thought, hey - why not give it a try? 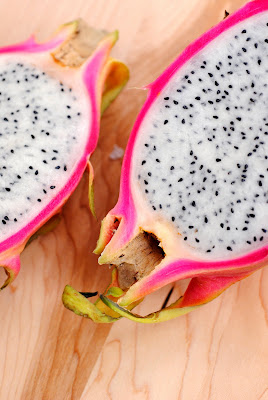 Of course the big question with any exotic fruit is: what's it taste like? In this case: not much. Even the NYT admits that despite all the hoopla, dragon fruit doesn't really have much of a flavor. I found the texture to be pleasing, which was a surprise given all those seeds, and the taste to be slightly sweet and very, very mild. A little bit strawberry, a little bit melon, a little bit grassy. But veeery mild.

Then there was the issue of what to pair it with. I thought about tequila. I was worried that it might overwhelm the dragon fruit's delicate flavor - I don't think anyone would describe tequila as "mild" - but I had good luck in the past pairing tequila with another unusual pink fruit that grows on a cacti. So I gave it a try. 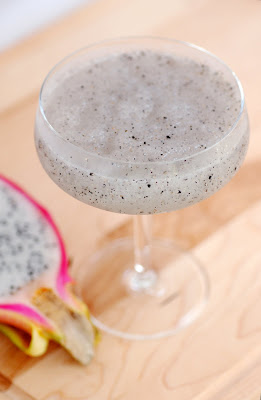 Combine all ingredients in a blender. Add 5-6 ice cubes. Run the blender, adding ice cubes as needed, until you achieve the desired slushy consistency.

Verdict: My gamble paid off. It's mild, it's sweet, it's refreshing - the tequila is definitely there, but, ever-so-subtly, so is the dragon fruit. In fact, I can almost taste the dragon fruit more in the margarita than I could in the plain old fruit. Maybe it's because dragon fruit and tequila both come from cacti, so they're buddies. Whatever it is: this is good.

Now if anyone needs me, I'll be drinking one of these bad boys on the beach. In Thailand.