A Tale of Two Daiquiris.

The good folks at Brugal Rum were kind enough to send me a bottle of their Brugal Especial Extra Dry, which, it turns out, makes a really lovely, balanced Hemingway Daiquiri.

And as luck would have it, Texas ruby red grapefruit is just back in season, so get you some of that. To make the drink: shake over ice and then strain into a chilled coupe. Garnish with lime. 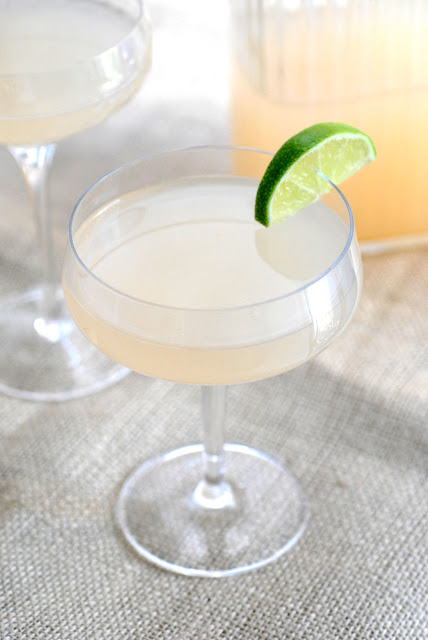 So how does it taste? Just like it looks. If you've been used to daiquiris of the kind dispensed by slushee machines on Bourbon street late at night, you may be in for a bit of a surprise. This daiquiri is very light, and delicate, and pink.
This particular recipe for a Hemingway Daiquiri comes from Jim Meehan (the PDT guy) by way of Food & Wine magazine. The other recipes I stumbled across did not quite agree on the proportions, but they did agree on the four basic ingredients: white rum, lime, grapefruit, and maraschino liqueur. Interestingly enough, according to Paul Clarke, the original Hemingway Daiquiri (which Hemingway invented and dubbed the 'Papa Doble', since I guess he was too modest to name a drink after himself), was composed thusly:
"...two and a half jiggers [or 3 3/4 ounces] of Bacardi White Label Rum, the juice of two limes and half a grapefruit, and six drops of maraschino, all placed in an electric mixer over shaved ice, whirled vigorously and served foaming in large goblets."

So of course I had to try that too. This wasn't the first time I had followed in the boozy footsteps of Ernest Hemingway, but I'll admit, I was a little intimidated. because you know, that's a whole lot of rum. Like a whole whole lot.

The Hemingway Daiquiri (ORIGINAL FOR REAL ERNEST HEMINGWAY VERSION)
3 3/4 oz white rum
juice of two limes (I wound up with a little more than 2 oz, but I swear I have terrible luck with limes and always end up with the non-juicy ones, despite my best efforts)
juice of half a grapefruit (about 2.5 oz)
6 drops maraschino liqueur (I used an eye dropper to be extra super sure to be faithful to the original recipe. Okay, I might've gotten 7 drops.)

Then I put all those things in the blender, and kept adding ice, running the blender occasionally, until I got to the desired consistency.

So here are some things you should know about the original, for real, super-authentic Hemingway Daiquiri. For one thing, this recipe makes a drink that is truly massive. I had trouble finding a glass that would fit the whole thing. It's also quite tart, although not in a bad way - I found it to be light and incredibly drinkable, like a limeade with a little extra kick. This might help explain how Hemingway supposedly consumed 16 of them at one sitting. Actually, according to Paul Clarke (who got his info from Papa Hemingway, a memoir about the author written by longtime friend A.E. Hotchner), the recipe above was the formula for the drink served by Havana's La Floridita bar to tourists who wanted to drink what the legendary author drank. The drinks served to Hemingway, Hotchner indicated, came in glasses approximately twice the size of those used for the 'tourist' version. Let's do a little math, shall we?

So just to put that into perspective, a 'fifth' of rum (ie, a traditional 750 mL bottle) contains about 25 oz of liquor. 120 oz of rum = almost FIVE BOTTLES of liquor. Even if we assume that Hemingway's record was for the 'tourist' daiquiri, that's still an impressive two and a half bottles of rum consumed in one sitting. From this we can draw one of two conclusions:

A. This story is exaggerated a wee bit, or
B. Ernest Hemingway was a BEAST.

Believe what you will. 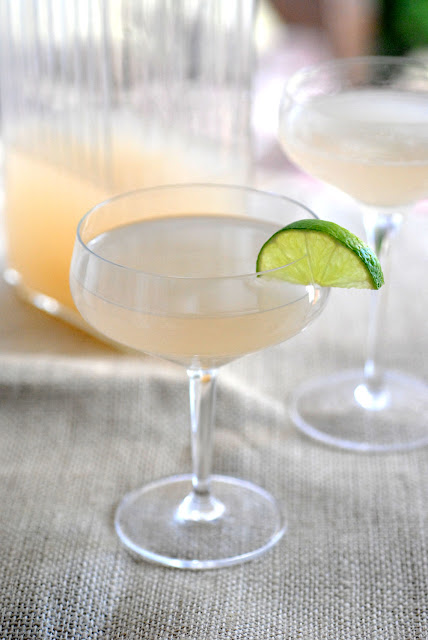 Whatever your thoughts on this, though, it's true that both Hemingway's original and the modern version are a surprisingly delicious, and remarkably efficient, alcohol delivery system. Cheers.

Posted by Nancy at 10:05 PM
Email ThisBlogThis!Share to TwitterShare to FacebookShare to Pinterest