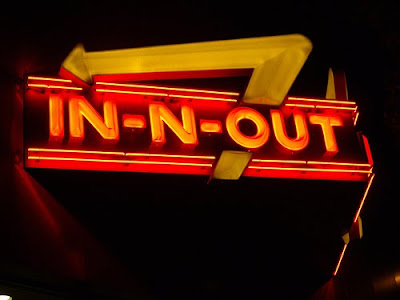 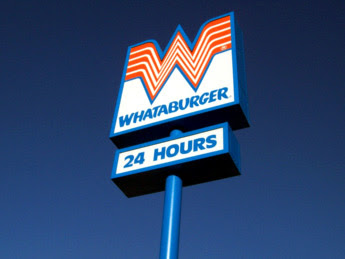 Some of you may know (okay, anybody who knows me at all probably knows) that I am obsessed with Whataburger. Well, I recently went on a two-week road trip mini-odyssey in the Southwest and California, where they...do not have Whataburger. Gamely, I decided to give In-N-Out, the Whataburger of the west, a try. I've always heard people raving about In-N-Out and I always thought, "it can't possibly be as good as Whataburger." In fact, I was sort of afraid to eat there, lest it actually be better and my beloved Whataburger tumble from the throne of Best Fast Food Ever. But every good faith deserves to be tested. And it wasn't like I was going to go two weeks without fast food, right? So I present to you, my loyal readers, my very thorough analysis.

Burgers: This one's a toss-up. The in-N-out hamburgers just taste quality. (After all, their slogan is "quality you can taste".) The onions are fresh, the meat is juicy...it tastes like something you would make on the grill, and you can get one in about five minutes. 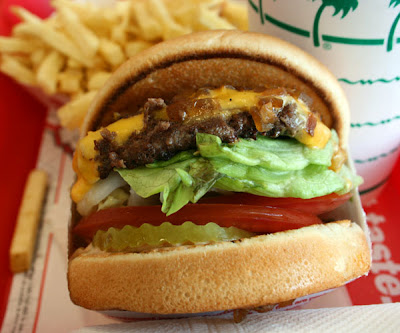 Meat-a-licious.
(I forgot to take pictures of my In-N-Out burger, so image: rachellb.com.)
On the other hand, a Whataburger hamburger has a certain...eatability. And no, I actually mean something by this - it is not just a random word I made up to avoid admitting that In-N-Out has better burgers. A Whataburger hamburger has a certain appealing floppiness. If this doesn't sound particularly positive to you, go get a Whataburger hamburger and you'll see what I mean. I promise, it's a good thing. It feels good in your hand, it feels good in your mouth. (And you thought mouthfeel was just for wines.) And it is exactly as tall as your mouth, so you don't have to smoosh it down before consuming it - this is something a lot of hamburger creaters ignore. The ratio of meat to fixins is delicately balanced, so that you taste not too much of one or the other. And if you order one with onions, it comes with pieces of onion that resemble actual onions, not tiny little mashed-up bits that are probably made in a laboratory somewhere. (I'm looking at you, McDonald's crackburger.) 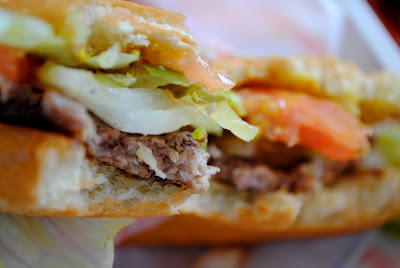 Fries: Whataburger. In-N-Out actually has a little tray liner about how great their fries are. They're like, made from a special kind of potatoes or something. I was underwhelmed. Whataburger fries do have the issue that they sometimes vary in crispiness from location to location, but even the soggiest Whataburger fries are superior to the In-N-Out ones, in my opinion. They looked so nice, but then when I ate them...eh. Maybe it's because...

Ketchup: Whataburger. Sometimes I wonder whether I just think Whataburger fries are awesome because I always eat them with Whataburger ketchup, which is hands-down the best ketchup ever. And then I realize that there are some mysteries that cannot be fathomed by the human mind.

Cult following: In-n-Out. I know, it's weird that I'm saying this, since even if nobody else really gave a damn, my own fanatacism about Whataburger would probably count as a cult following. But the thing is, people are just crazy about In-N-Out. I used to have an In-N-Out shirt (that I got from the In-N-Out in Las Vegas years ago, pre Whataburger obsession), and every time I wore it, guaranteed, at least one person I saw that day would freak out and be like, "omg I LOVE In-N-Out!!!!". And I would have to admit that I'd only eaten there once and it didn't totally like, blow my mind, which made me feel kind of lame, so I stopped wearing it. But yeah, In-n-Out lovers are nuts. And it has that whole secret menu items thing going on, and everybody knows people just love secrets. It makes you feel like you're a part of something. Of course, biting into a hot piece of Whataburger toast makes me feel like I'm a part of something, too. Part of something very, very delicious.

Atmosphere: In-N-Out. They're got that whole retro-fifties thing going on. Whereas Whataburger...well, when it comes to ambiance, it's just a fast-food restaurant. There are those old-school A-frame whataburgers that are super cool, but those are kind of a dying breed. And all that orange can get a little overwhelming.

Service: Whataburger. While the In-N-Out staff (in my experience) is freakishly perky, at Whataburger, if you eat in, they will actually bring you order to your table. (As opposed to shouting your order number at you across the restaurant.) And they've got those little orange trays with ketchup and everything. I don't know of another fast-food restaurant that does that.

So it's a tough call. The nice thing is, I'm not sure anyone would ever have to make this decision, since it seems like In-N-Out territory (west coast-ish) picks up about where Whataburger territory (Texas and its environs) ends. Is there, in fact, any city with both a Whataburger and an In-N-Out? Does such a fast-food mecca exist?** For me, I think the choice is clear. I rally to the banner of the orange and white. (But only when it comes to fast food. In football this is blasphemy.) Although maybe it's just the ketchup. 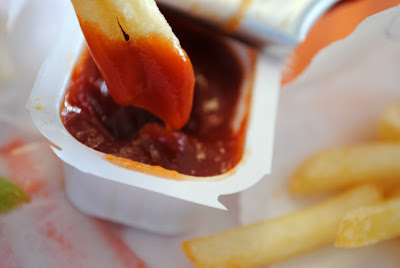 Best. Ketchup. Ever.
**Updated to add: thanks to the in-depth research tool that is Google Maps, I now know that such a place does exist, and it is called Phoenix, Arizona. Or Tuscon. Yet another reason to love Arizona. (The first, obviously, being that big old hole in the ground. I love me some Grand Canyon.)
Posted by Nancy at 11:58 AM
Email ThisBlogThis!Share to TwitterShare to FacebookShare to Pinterest