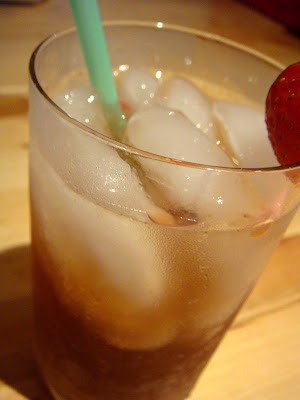 As a mixologist, I am always trying to push the limits. It's a lot harder to impress me, booze-wise, than it used to be. Lots of drinks that would've seemed wild and wonderful to me a couple of years ago are now familiar territory. Like, basil in a margarita? Child's play. But then, while browsing through one of my favorite cocktail books, I found a recipe for a drink using balsamic vinegar. Yeah, like what you dip bread in at Italian restaurants. Whoa.

I knew I had to try this.

Firstly, I love anything with balsamic vinegar, and secondly, I was having a cocktail party and wanted to impress my guests with my use of innovative, wacked-out ingredients. I could just see my friends telling their friends - "oh my gosh, I went to this party and this girl made a cocktail with balsamic vinegar and my mind was blown". This was going to be legendary. The one big hurdle was - in order to make this history-making balsamic cocktail, I first had to create a balsamic syrup, using the directions below:

In a tall, straight-sided, medium pot, combine the sugar and water and heat over medium-high heat, stirring until the sugar dissolves. Brush down the sides of the pot with a wet pastry brush to remove any lingering sugar. Continue to cook the sugar and water, gently swirling the pot occasionally to distribute the heat, until the water evaporates and the sugar caramelizes and turns to an amber color.
Meanwhile, in a small saucepan, bring the balsamic vinegar to a simmer. When the caramel reaches the desired color, remove the pot from the heat and slowly add the balsamic vinegar. Take extra care when adding the vinegar, because it will bubble and pop violently when added to the caramelized sugar. Stir the mixture with a wooden spoon to dissolve any solidified caramel. Return the pot to the stove and cook over medium heat for about 5 minutes, until the mixture has thickened slightly.
Create an ice bath by filling a large bowl with ice water. Pour the syrup into a smaller bowl and then set it in the ice bath to cool, making sure the level of the melting ice is well below the level of the smaller bowl. Transfer the syrup to a small bottle with a lid and refrigerate. It will keep for up to six months or longer.

As a person who does not cook, I had the proper response to these directions, and that was: fear. Through people who actually cook I had heard of the difficulties and trials of making caramel, and I was very afraid. Only my desire for cocktail greatness could push me to attempt something so foolhardy. I wish I could say that my fears were totally unfounded, and that I created a perfect balsamic syrup on the first attempt. Only...not so much.

First try: burned the caramel.* I made the syrup anyway (because the balsamic vinegar was already simmering, and what was I gonna do?), but it was so thick it had to be scraped off the inside of the jigger when I tried to make a drink with it. Oh, and it smelled like burning.
*The only way to prevent this, I learned, is to not move from in front of the stove the entire time the caramel is cooking. In fact - don't even look away from the pot. Caramel burns fast.

Second try: used a pot that was too big.** All the water cooked off before the sugar caramelized and I ended up with...damp, slightly browned sugar. Fail.
**That part about the medium-sized pot? That's important.

Third try: Added too little balsamic vinegar (either I measured it wrong or let it simmer for too long - either way, I'm a moron) and ended up with some kind of giant, unholy balsamic caramel candy-thing. It was liquid until I put it in the ice bath, and I was so sure I had finally succeeded. Poor, disillusioned Nancy. I came back half an hour later to discover that in the ice bath, my "syrup" had congealed into a metallic brown brick at the bottom of the bowl.*** It was exactly like one of those brach's caramel candies I used to eat as a kid - except it smelled like italian food. And looked like an oil spill. (I say "smelled". I ate an octopus once - it wasn't fried or anything, and you could still see its tiny octopus head and tiny suckers on its tiny octopus arms - but I wouldn't eat this.) Giant, gooey, caramel-y fail.
***Important: pay attention to the part that says "thickened slightly". Don't worry if the syrup is still runny in the pot - it will get syrupy in the ice bath. If the syrup is syrupy in the pot - you will end up with a brick, like I did. 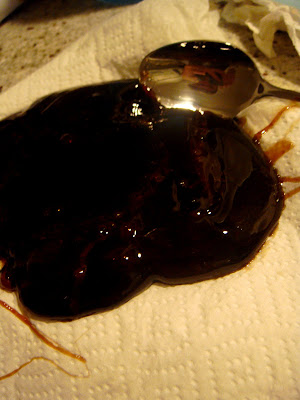 Yummy.
Fourth try: Finally got it right. Holy crap, this was hard.

So at long last, I was ready for:
¡El Sangre de Fresa! (that's "Strawberry Blood", for those of you who do not speakee the Spanish)
recipe from Jeff Hollinger and Rob Schwartz, of the Absinthe Brasserie & Bar in San Francisco.
2 strawberries, hulled and quartered
4 to 5 basil leaves (thank you, backyard herb garden)
1/2 oz hard-fought balsamic syrup
1 1/2 oz cachaça*
1/4 oz Cointreau**
1/4 oz fresh lime juice***
Soda water
*What is cachaça? Glad you asked.
**Or you can be cheap and use triple sec, like I did.
***Fresh!!

In a mixing glass, combine the strawberries, basil and balsamic syrup 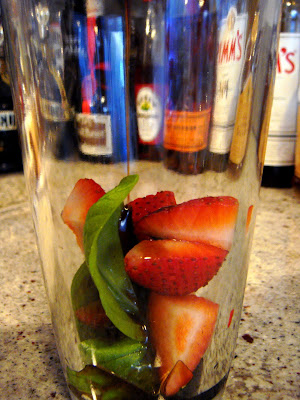 and muddle into a pulp. 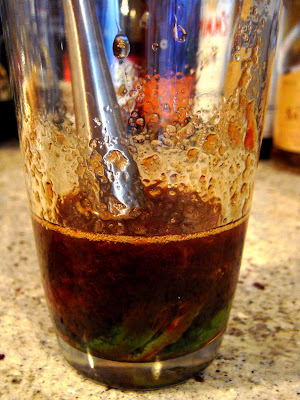 Top with ice and add the cachaça, Cointreau, and lime juice. Shake until cold, strain into an ice-filled pilsner or collins glass, 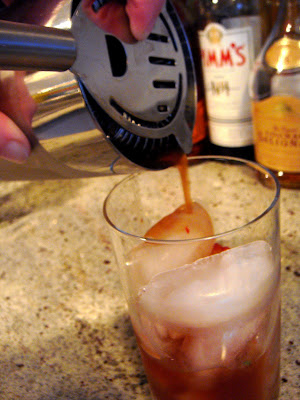 and top with soda water.

So at the end of the night I sent Garret home with a schweppes bottle full of sangre de fresa. It's the first time I've ever made a doggie bag at a cocktail party. He seemed delighted with it.
But before you write this off as That Drink That Only Garret Liked - know that I made another. I had to, because I wanted to take purdy pictures for my blog and I hadn't gotten any in my pre-party frenzy. This time I shelled out for the Cointreau (my first bottle, and sheesh, was it expensive). Either this drink is bounds better with the Cointreau, or it just grew on me, because as I sipped Sangre de Fresa #2, I found myself thinking - you know, I might really like this. All the flavors are quite bold - the orange, lime, and strawberry catch you right away, with smoky/savory/vinegar on the finish. It's unexpected, bizarre, and - dare I say - surprisingly delicious. 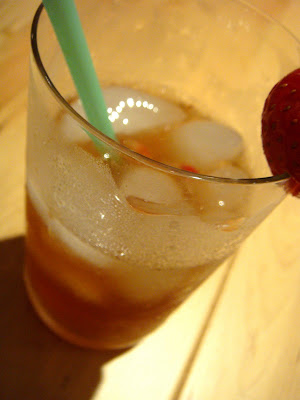 Posted by Nancy at 11:18 AM
Email ThisBlogThis!Share to TwitterShare to FacebookShare to Pinterest